Home » Hardwick adamant that Rioli, Bolton were right to take a ‘stand’

Follow all the action from Friday night’s AFL clash between St Kilda and Geelong on our live blog from 7.30pm, and Saturday’s games from 1.15pm.

Richmond coach Damien Hardwick has again backed Daniel Rioli and Shai Bolton, declaring they did the right thing in taking a “stand” during a nightclub altercation, which AFL chief Gillon McLachlan later suggested they should have avoided. 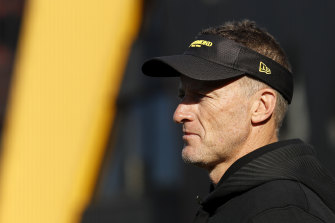 Bolton was left with a broken wrist and Rioli a black eye although the latter will line up against Greater Western Sydney at Marvel Stadium on Saturday after an incident at Club YoYo in Melbourne’s CBD last Saturday.

The Tigers, including Hardwick and chief executive Brendon Gale, had already defended the pair, the incident arising after a person made inappropriate comments about Rioli’s partner.

While McLachlan said on Thursday provoked players were best to avoid conflict, Hardwick on Friday suggested this was dependent on circumstances.

“We don’t condone violence in any way, so don’t get me wrong there, but what I will say is there are certain situations where we expect our players to make a stand,” Hardwick said.

“When a young lady is being intimidated inappropriately or whether she felt insecure, we expect our players to stand in. Daniel, as far as we’re concerned, did the right thing.

“Do we want the violence to be part of that? Absolutely not. But the fact of the matter is, and I think Gill [McLachlan] is on the same page here, we just need players to make sure that people are treated respectfully.”

McLachlan had said: “It’s difficult at times. I know that provocation exists and circumstances are always relevant but my general position is that people need to walk away and be above that.”

On Friday, McLachlan said on 3AW that it was up to clubs and players to determine whether they would be better off banning nightclub visits.

“I know clubs have had policies like that before, then if that is what the playing group agreed on, then clearly I’d be supportive,” he said.

Police are not investigating the incident but the AFL’s integrity unit is. Hardwick said he was “comfortable” where the investigation sat.

McLachlan said: “Let’s see where everything plays out in terms of the report and then, if appropriate, I would have more to say.”

Rioli took part in a light training run on Friday and Hardwick hopes he can have a major impact in a team that has been hard hit by injury.

“He’s in good spirits at the moment and, once again, we hope he has a really good performance because he’s important to how we play.”

Hardwick said Bolton was “disappointed” to be on the sidelines but the break would allow him to work on his craft.

The Tigers are missing key members of their front-line midfield – skipper Trent Cotchin, Shane Edwards, Dion Prestia and Kane Lambert – but key defender Dylan Grimes will return from a mandatory 12-day break for concussion. Dustin Martin is playing through a foot complaint.

The Tigers will unveil Hugo Ralphsmith, the 46th selection in the 2019 national draft, whom Hardwick said was a great kick and good mark. The son of Sean Ralphsmith, the former Hawk and Saint, he will spend time on a wing and up forward, as the Tigers seek to rebound from a stinging loss to Geelong.

Hardwick said Sydney Stack “was making positive inroads on and off the field” but was still weeks away from a senior return. Stack returned to the club in March after a tumultuous 2020 and off-season in which he was arrested and spent time in jail.