In today’s AFL briefing, your wrap of football news:

Check back for more updates throughout the day.

A slew of Hawthorn greats, including the man who helped save the club, Don Scott, have delivered a united statement, declaring president-elect Peter Nankivell is the right man for the top job.

Nankivell and 1991 premiership star Andy Gowers are vying for the presidency, with voting now open, and closing on December 9, ahead of the club’s annual general meeting on December 13.

Amid ongoing barbs between the Jeff Kennett-endorsed group and the Hawks for Change faction, it emerged on Saturday that Scott, Peter Hudson, Peter Knights, Jarryd Roughead, Jordan Lewis, Nathan Thompson, Joel Smith and Campbell Brown – through a public relations company acting for the club – had combined as one voice, backing Nankivell, Kennett’s preferred successor, to win the vote. 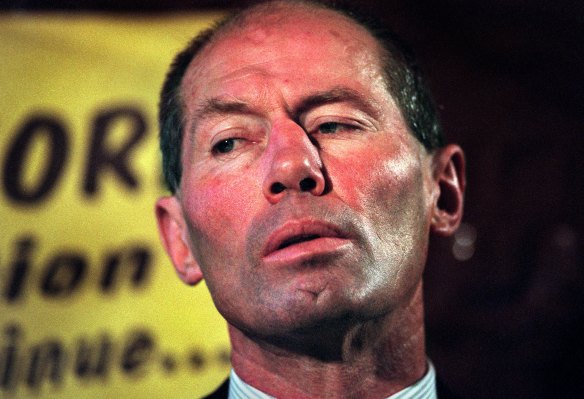 Hawthorn great Don Scott was the man who helped to save the Hawks from merging with Melbourne in 1996.Credit:Jack Atley

Scott, a dual-premiership skipper who famously saved the club from a merger with Melbourne in 1996, and retains an influential voice, said Nankivell was the right man to guide the club into a new era.

“Earlier this year I was a member of the nominations committee to identify a candidate for president of the club. Andy Gowers was also on that committee, which was unable to recommend to the board a presidential candidate,” Scott said.

“Following that process, certain of us on the nominations committee were of the view that Peter Nankivell was the best person to lead the club. Peter was invited by the board to nominate for the role. I remain of the firm view that Peter Nankivell is the best person to lead the club as president. I am also of the view that there should not be any politics in our football club and I remain concerned about the role of Hawks For Change, who seem to be driving an agenda but with no platform.”

Gowers, who also has past-player support, including from premiership teammates Gary Ayres and Peter Schwab, was contacted for comment on Saturday. Gowers also has the backing of, among others, former club president Ian Dicker, and Ed Sill, a board candidate and the president of the Box Hill Hawks.

Lewis, the four-time premiership star, said he was supporting the current board’s ticket of Nankivell, Katie Hudson, Anne-Marie Pellizzer and Maria Lui “on the back of a successful transition to what hopes to be the next dominant chapter in the club’s rich history”.

“Diversity is as important as ever as we welcomed our AFLW team for their inaugural season. I firmly believe the club’s mission and player development approach will put us in a strong position for years to come. The financial results delivered this week will also set the club up for complete financial independence for the foreseeable future,” he said. 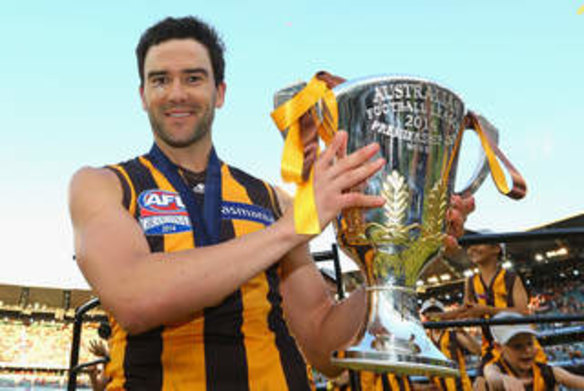 Goal-kicking great Hudson claimed the current board “has done an outstanding job navigating the obvious challenges of the past few years, and has strategically positioned the club for future success through resetting the men’s football program, through the introduction of our AFLW team and its transformational vision to deliver the Kennedy Community Centre”.

The Hawks for Change ticket has focused on, among several issues, Kennett’s antagonistic relationship with the state government and how his “late-night tweets” may cost Hawthorn a $15 million injection. Kennett conceded on Friday his tweets may have impacted the funding bid.

The Hawks have signed an agreement with ADCO Constructions to build the Kennedy Community Centre, which the club says is fully funded on the football side. But there is no guarantee the Hawks will receive the allocated $15 million from the Victorian government to enhance the community component of the $100 million project.

Board candidate and former deputy premier James Merlino, who is part of Hawks for Change, told The Age that the Kennedy Community Centre was “an incredibly exciting project” but needed to go beyond football.

Grimes on track for full pre-season

Richmond co-captain Dylan Grimes has impressed club medical staff in his recovery from surgery and is ready to complete a full pre-season.

Grimes, 31, required hamstring surgery in August after he was hurt in the round-20 clash against Brisbane at the MCG. He missed the final three home-and-away games and what was the season-ending loss to the Lions in an elimination final at the Gabba.

The veteran defender has a history of hamstring issues, so understood what awaited in his recovery. 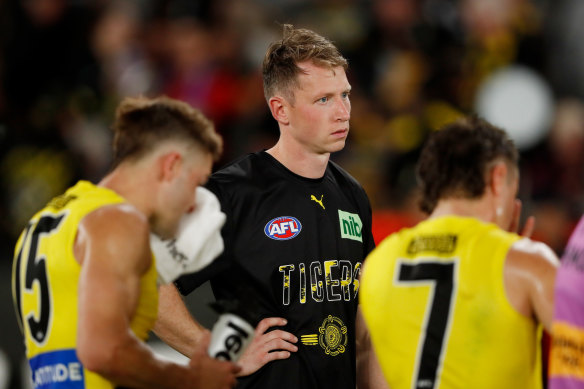 Tigers co-captain Dylan Grimes is expecting to complete a full pre-season, having had hamstring surgery late in the 2022 campaign.Credit:AFL Photos

Tigers officials say he has been running and recovering well and will join in full training when the senior group officially resumes later this month.

Grimes remains a key part of the Tigers’ premiership plans, and his composure was missed late in the season.

Ahead of his 200th game in June, Grimes opened up about his hamstring battles, revealing he had been on the verge of retirement before his second hamstring tendon surgery a decade ago.

Between 2011-13, Grimes managed to play just 25 of a possible 67 senior games because of hamstring issues, and was sent to Germany to spend time with German doctor Hans-Wilhelm Muller-Wohlfahrt for expert treatment.

As Grimes ramps up his preparation, Dustin Martin has been seen running laps at Punt Road, with the Tigers hoping the star midfielder can reclaim his place at the top of the league’s pecking order.

Martin managed only nine games through injury and a leave of absence to deal with the death of his father. He averaged less than 19 touches per game.

He returned for the elimination final, having not played since round 16, but the decision to select him was criticised after coach Damien Hardwick declared before the game that the triple Norm Smith medallist was only “80 per cent fit”. He had only 15 possessions and a goal in the two-point loss to the Lions.

The Tigers expect to remain in premiership mode this season, having acquired midfielders Tim Taranto and Jacob Hopper through the trade period. Their first-to-fourth year players begin official training on Monday.

Hamish Watson: It's 'win or bust' for Scotland against Argentina