Hawthorn’s board candidate Ed Sill believes the widening gap between members and the club is putting the Hawks reputation as “the family club” at risk as the Hawks for Change group backed former player Andrew Gowers as president.

Sill told the Hawk insiders podcast on Thursday night the club “can no longer claim to be the family club, and it is something that we need to earn back” and also said the stalled growth in membership was a red flag for a club that led the competition in attracting members during the previous 20 years.

Box Hill president Sill claimed the club had been the worst performed Victorian team when it came to attracting membership in the past six years and was well below the competition average of 36 percent growth during that period.

As well as being the Box Hill president, Sill has a close relationship with senior coach Sam Mitchell who has launched a complete revamp of the playing list as he looks to land the club’s first premiership since 2015. He is advocating for an improved relationship with members accusing the club of talking to rather than listening to members. 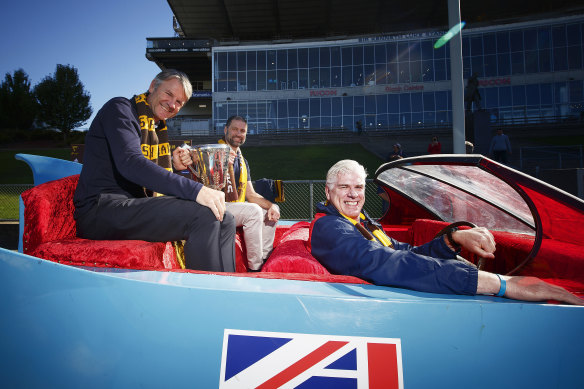 Meanwhile, the support of Gowers – who is competing against Peter Nankivell – to replace Jeff Kennett as president at the December election from the Hawks for Change was not unexpected however in a letter to the group’s members they said Hawthorn had been “a club within a club for too long”.

The group questioned the process that saw Nankivell, who was head of the nominations’ committee set up to find a preferred president, become the president-elect when they decided there was no stand-out candidate. The group described that decision in a statement at the time as “flawed, failed and wrong”.

They described Gowers as selfless and said he would lend the right support to Mitchell and AFLW coach Bec Goddard.

“He will also push strongly to restore our famous family first club values. It is on this basis that we believe Andy is the leader our club needs now,” Hawks for Change wrote in a statement.

Gowers played 89 games for the Hawks and was an important member of their 1991 premiership team. The 53-year-old was board’s director of football during the three-peat and has run a successful business.

He is standing against Nankivell who is a board member.

The candidates for the three vacant board positions include Sill, James Merlino, Katie Hudson, Anne-Marie Pellizzer and Maria Lui.