World Cup-winning Wallabies Daniel Herbert, Joe Roff and Richard Harry are on the shortlist to join the Rugby Australia board as the Super Rugby clubs push for a new chairman to be put to work on the looming broadcast deal.

Senior Australian officials have told the Herald that Herbert, Roff and Harry will vie for the single vacancy for a post-1995 Wallaby, while Sydney University doyen David Mortimer remains the frontrunner to be nominated for the role of chairman-elect. 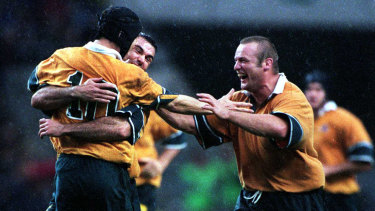 There also appears to be a concerted push for Mortimer, should he receive and accept the states' nomination, to get to work before he is formally elected at the annual general meeting on March 30, replacing interim chairman Paul McLean sooner rather than later.

The Super Rugby chairs appear to want a new chairman to have visibility of RA boss Raelene Castle's negotiations on the new five-year broadcast rights deal, for which telco Optus appears to be in the box seat.

Castle and her strategists Shane Mattiske and Michael Tange want to have the deal sewn up and announced before the AGM, where four board seats are up for election.

But the Super Rugby chairs believe it is reasonable that a chairman-elect, who will bear fiduciary responsibility for the repercussions of any deal down the track, should have a hand in any agreement.

It would be an 11th-hour intervention, given negotiations have been underway for six months or more. But if the states can agree a nomination for chairman-elect by the end of the week it could conceivably happen, giving the candidate three weeks to work with Castle on the process. 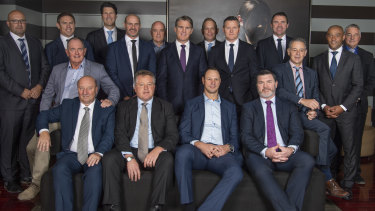 Mortimer, a corporate and governance veteran with more than 50 years' experience as chairman of more than 20 corporations and non-profit organisations, including the MySale Group, Opera Australia, Leighton Holdings and Australia Post, declined to comment when contacted by the Herald. But sources indicated Australia's two biggest rugby provinces, Queensland and NSW, would be comfortable nominating the 74-year-old.

Late last year he was instrumental in setting up the Australian arm of Kiwi rugby academy International Rugby Academy Australia. He is still the longest-serving president of Sydney University Football Club, stepping down in 2016 after 16 years at the helm.

The states also appear satisfied with the shortlisting of Herbert, Roff and Harry, all of whom were on Rod Macqueen's starting Wallabies side when Australia won its second World Cup with a 35-12 win over France in Cardiff in November 1999.

Some consider Herbert the best qualified for the role, which sits alongside the other former player seat, occupied by fellow former Wallaby Phil Waugh. The 67-Test centre is chief executive of strata management company SSKB after almost five years in rugby administration, as Queensland Rugby Union chief commercial officer and executive general manager.

Besides Mortimer and one of either Herbert, Roff or Harry, there are two other seats up for election or re-election. Ann Sherry's seat, which she vacated some months back, looks set to be filled by a woman, while McLean will be seeking re-election after agreeing to step in as interim chairman when outgoing chairman Cameron Clyne stood aside in a surprise move a week ago.

Meanwhile, Castle arrived in London on Sunday evening for meetings with World Rugby and Australia's SANZAAR partners. On the agenda is an offer from private equity firm CVC for some kind of global rights tie-up.

"We're in a due diligence phase, we've got a board meeting and we'll be having discussions about CVC," Castle said last week.

"At a Rugby Australia level we've also had multiple discussions with multiple private equity organisations to see what the landscape looks like and what the options might be.

"I would say that SANZAAR is at an investigative stage and the northern hemisphere is much more advanced."

Skin in the game: Addo-Carr’s tribute to iconic moment

SIR CLIVE WOODWARD: Gatland has pulled a few rabbits out of the hat