George Hewett will play for Carlton in 2022 after Sydney decided not to match the Blues’ four-year offer to the 25-year-old midfielder.

The Swans will receive a pick at the end of round two (currently pick 39) as compensation for losing Hewett who played 120 games for Sydney after making his debut in the opening round of 2016.

He will join Adam Cerra as additions to the Blues midfield under new coach Michael Voss with Carlton set to negotiate with the Dockers during the trade period with pick six set to form the foundation for the deal. 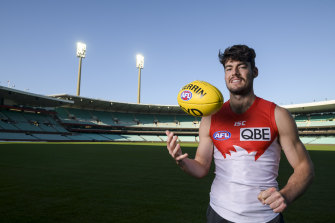 Swans’ football manager Charlie Gardiner praised Hewett as he departed having been a player the club was open to trading at the end of last season.

“He is a great competitor and has been a really consistent player for us over his 120-game career,” Gardiner said.

“We regard him highly as both a player and person. He has been a very popular and respected player within the four walls of our club.”

Sydney are expected to enter a tough negotiation with Adelaide during the trade period after Jordan Dawson, who finished third in the Swans’ best and fairest, decided to return to South Australia nominating the Crows as his preferred destination.

The Swans offered Dawson a significant deal and would welcome him back if the 24-year-old had a change of heart with Sydney open to him re-signing for two years and considering his options when he becomes a free agent.

However with Dawson unlikely to shift course the Swans will be looking to extract a high draft pick from the Crows who have picks four, 23 and 37.

They will need to find a selection between picks 10 and 20 to come close to satisfying Sydney who have made it clear they are disappointed to lose Dawson after his breakout year.