Luckless Carlton defender Caleb Marchbank will play in the VFL this week after more than a year out, raising hopes among the club’s hierarchy their wafer-thin key defensive stocks will soon be strengthened.

But the Blues face a nervous wait on midfield recruit George Hewett, who is no certainty to play next week as he battles bleeding in his corked calf.

As Carlton regained back Zac Williams from injury, Melbourne squeezed out key forward Sam Weideman and welcomed back five premiership heroes for the clash with St Kilda, who have recalled Zak Jones.

Weideman booted nine goals from five games but with Luke Jackson returning and Ben Brown preferred in the goal square finds himself back in the VFL along with Luke Dunstan, Toby Bedford and Jake Melksham.

Marchbank’s return to the field comes with the Blues depleted for key back options. Coach Michael Voss and his match committee would have faced a major headache had Lewis Young’s one-game suspension not been overturned. 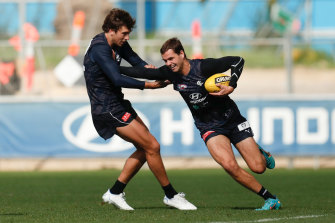 The Blues do not have any ready-made tall defenders available behind Jacob Weitering and Young, having lost mainstay Liam Jones to retirement and Oscar McDonald to a back injury.

Youngster Brodie Kemp was being tried been played as a forward in the VFL but has been swung back into defence to provide cover.

Voss broke the news of Marchbank’s impending VFL return to the Blues players on Friday. He has not played since rupturing an anterior cruciate ligament in April last year.

“He’ll actually play VFL on the weekend, so that’s a really great news story,” Voss said. “He’s slowly been building his work. He’s got a fair body of work now under his belt. He gets through today’s session and he’ll be playing VFL.”

The Blues have not set a timeframe on how many games Marchbank would need in the VFL before being considered for senior selection, though given his lengthy injury history he is unlikely to be pushed before he is ready.

“We don’t have a criteria on it outside of, clearly, spending a couple of weeks just to be able to get himself back to match fitness is the important thing,” Voss said.

“He hasn’t played a lot of footy in recent times. But we’ll let the fitness and the form really determine what timeframe that might be, but there’s no rush from our end.”

Such is Marchbank’s ability, senior football figures at Greater Western Sydney were extremely disappointed to lose the No. 6 pick from the 2015 draft, but since crossing to Carlton for the 2017 season he has managed just 41 of a possible 112 games. At his best he would slot comfortably into the Blues’ first-choice back six.

Voss has already liked what he has seen on the track from Marchbank.

“He’s clearly athletic, that’s for sure. He covers the ground really well,” Voss said. “And he’s a really smart footballer. It’s really early chances for him. He’s just got to get out and play some footy.

“My message is really simple for him. It’s to get out and play some footy and go and enjoy it. These are the moments I think that you sort of just got to go out there and just enjoy what you do. And it’s his first look at it and he’s just got to take his time and everyone’s just got to have a little bit of patience.”

Hewett was wearing a compression stocking on his left leg at training and left the track early as he battles bleeding in his corked calf. He did not play last week and is in doubt to feature next round against Greater Western Sydney. 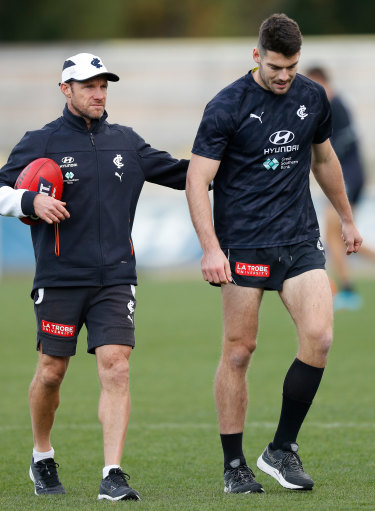 “If he can get himself running well, clearly he gives himself a chance, but he’d want to be able to train I reckon both times next week before we considered it,” Voss said.

Spearhead Harry McKay, sporting strapping on his right knee, took part in training after being affected by a virus earlier in the week and is expected to face Adelaide.

McGregor to stagger into record books, then breathe a sigh of relief