The NRL clubs have united in a bid to keep the competition alive in 2021, but it’s far from one big happy family.

With the affected teams split into three hotels across the Gold Coast, Brisbane and Sunshine Coast, not everyone will be thrilled about their neighbours for what could be as long as three months.

From attacking one’s sex life to foul-mouthed tirades, there’s history among rugby league players and staff that will make for some awkward conversations in hotel corridors and lobbies in the south-east of Queensland.

The Herald takes a look at the biggest off-field match-ups in each of the hubs. 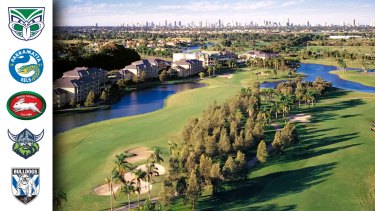 The Mercure Gold Coast, which five teams will be calling home for at least the next month.

In 2018, former Newcastle coach Nathan Brown dropped one of the most salacious comments in a press conference when he attacked Wayne Bennett for criticising the state of the Newcastle Knights.

The pair already had history. Brown was sacked by the Dragons in 2008 to make way for Bennett, who added the final touches to Brown's roster to take the club to a premiership in 2010.

Brown then took over from Bennett at the Knights in 2015. A few years later the Knights toppled Bennett's Broncos, with the veteran coach claiming that Brown had "unbuilt" the club following his departure in 2014.

“He has done a good job there, but we didn’t leave it in bad shape,” Bennett said of Brown. “He unbuilt it, so I suppose if you unbuild it, the next thing you’ve got to do is rebuild it.”

Brown couldn’t help himself after his side’s 15-10 win, taking a personal swipe at the coach.

“It’s a bit sad isn’t it? The old fox, he’s won seven premierships, he’s coached for 30 years and I aint ever publicly bagged Wayne or anyone,” Brown said.

“And then he comes and has a shot at me. I don’t think he needs to behave like that myself.

“The reality is when Wayne came to town, if he thought with his big head instead of his little head I wouldn’t have to rebuild the joint.”

Brown then stood up from his chair and walked out of the press conference saying: "you can take that to him if you like". Boom!

Who could forget the outpouring of emotion from Canberra forward Corey Horsburgh last year when he left Bankwest Stadium in tears while flipping the bird to a small but vocal group of Parramatta fans in the stand.

It came after what seemed an innocuous incident involving Parramatta’s Ryan Matterson, who made the tackle on Horsburgh late in the first half.

Horsburgh took exception to the tackle, with a push and shove igniting before emotions got the better of the fiery Raiders redhead. 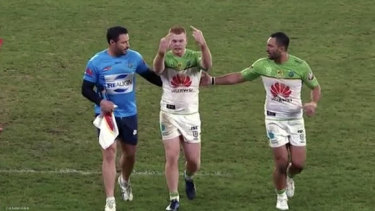 Horsburgh's teammates tried to calm him down but it didn't stop him from calling out the Eels back-rower.

He left the field and later returned on crutches. It was the last time he wore a Raiders jersey that year.

Cody Walker wasn’t in a celebratory mood on Good Friday. He copped a one-game ban for a deliberate elbow to the back of the head of Nick Meaney.

Walker fell onto the Bulldogs fullback with a cocked forearm that collected him in the back of the head.

“You could see that was deliberate,” Rugby League immortal Mal Meninga said during Fox Sports’ broadcast. I think he’s in some serious trouble.”

Walker rag-dolled him to the floor and instigating an all-in brawl between the two teams. 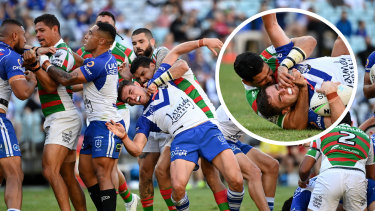 Cody Walker and Kyle Flanagan went at it earlier in the year during a spiteful Good Friday clash at Stadium Australia.Credit:NRL Photos

”I’ll check the medication he’s taking,” Rabbitohs coach Wayne Bennett said after the game. “There was obviously something going on there. He had the angry pills in today.” 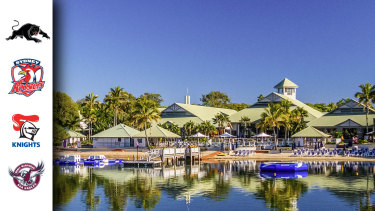 The Panthers, Roosters, Knights and Sea Eagles will all share the Sunshine Coast hub. It’s the same hotel Melbourne stayed at last year.

The Sydney Roosters coach was pretty disappointed with Adam O'Brien, his assistant at the time, when it emerged late in the 2019 season that the Newcastle Knights had lined him up to take over from Nathan Brown the following year.

The Roosters were furious that O'Brien was considering the job just three weeks out from the finals – and just nine months into a three-year deal after joining the club from the Melbourne Storm. 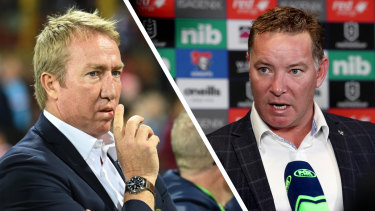 While O'Brien had a clause in his contract that allowed him to walk away for a head coaching job, the Roosters believed O’Brien gave them verbal assurances he would not consider leaving until the end of his second season. O’Brien privately disputes that he made such a promise. 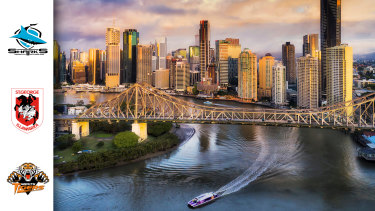 Three teams will call Brisbane home for at least the next month.Credit:NRL Photos

Anthony Griffin once declared Matt Moylan was the next Darren Lockyer. Soon after that he made him captain of the Penrith Panthers in 2016.

It was all going well until April Fool’s Day of 2017, when Moylan, Waqa Blake and Peta Hiku all disobeyed the coach. 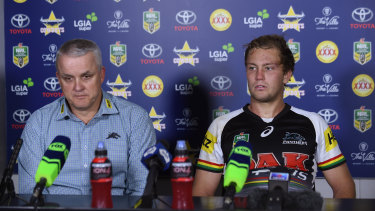 Anthony Griffin and Matt Moylan attend a press conference during their time together at the Penrith Panthers.Credit:NRL Photos

Griffin ordered his players not to leave their Melbourne hotel following a 28-6 loss to the Storm because they “hadn’t earned the right”. They didn't listen.

The players were dropped and people inside the club began to notice the relationship between captain and coach gradually deteriorate.

It reached tipping point later that year when Penrith stood Moylan down a week out from the finals because of concerns over his mental health.

He didn’t play another game for Penrith and left the club a few weeks later to join the Sharks in a swap deal with James Maloney.

The referees are bunkering down with the players in Brisbane. Last year referee Grant Atkins sin-binned Josh McGuire for dissent while he was playing for the Cowboys in round 18.

McGuire wasn’t happy with the treatment from the Storm players in a tackle early in the match, yelling “f— me, c—” at Atkins.

The referee immediately stopped play and sent him to the sin bin. 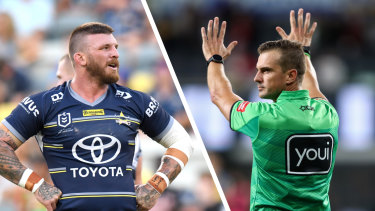 Josh McGuire was sent to the sin bin last year for a foul-mouthed tirade aimed at referee Grant Atkins. They are now in the same Brisbane hotel for at least the next month.Credit:NRL Photos

“You can go to the bin for that,” Atkins said at the time. “I’m not copping that dissent, I’m not going to repeat what you said but you can go.”

The Cowboys players asked the referee what had been said, to which Atkins replied "you can ask him when he comes back".

The origins of this feud go back to 2016, when Josh McGuire took to Twitter after Queensland’s game two victory, posting: “winners have parties, losers have meetings”.

Fifita retaliated in the lead up to the game three dead-rubber, eventually won by NSW. “At the end of the day, he didn’t get one fast play-the-ball and was dominated by us in game two,” Fifita said back in 2016. “I’m not scared of him and I’m not scared of anyone in his team.” 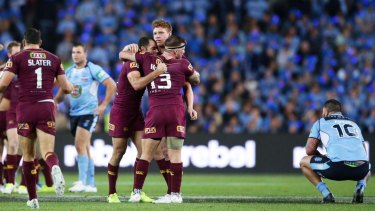 The following year, after Queensland levelled the series with a win in game two, McGuire sprayed Fifita after full-time.

It was reported at the time that the words used were to the effect of "we knew you were shit" and "you are just shit c—s". It came after McGuire performed an illegal cannonball tackle into the legs of Fifita during the game.

“There’ll be nothing better than us going up there and taking out the series on Queensland soil,” Fifita said at the time. Unfortunately for Fifita it didn’t go to script with Queensland clinching the series at Suncorp.

The Sharks centre was suspended for three games for a swinging arm on Dufty in round one. It instigated an all-in brawl after Dragons prop Blake Lawrie took exception to the tackle.

“It was an accident. I’ve never purposely tried to hurt someone,” Ramien later said. “I’ve never been a dirty player. We play a contact sport. Everyone who goes out, goes out to play physical.