After almost 20 years of struggles, including players being arrested simply for playing rugby league and games being scheduled at midnight to avoid the authorities, the score didn’t matter to Steve Georgallis.

Greece are up for the Cup: it’s a cause for celebration in itself.

“It’ll sink in later on with a few ouzos,” Georgallis said after a gallant 34-12 loss to France in their World Cup opener in Doncaster on Monday night (Tuesday AEDT).

The Western Suburbs warhorse has been there throughout Greece’s international existence. The captain, coach and five-eighth from the nation’s first game in 2003 has guided a proud rugby league community – which has produced NRL names like Anasta, Peponis, Politis and V’landys – through an odyssey worthy of Greek mythology in recent years.

“When the bus was leaving, I just thought about all the tough times and hard years we’ve had to get here,” Georgallis said.

“And then it actually turned to joy when we got off the bus. You saw how much it meant to them to play for Greece. I’m just so proud of them.” 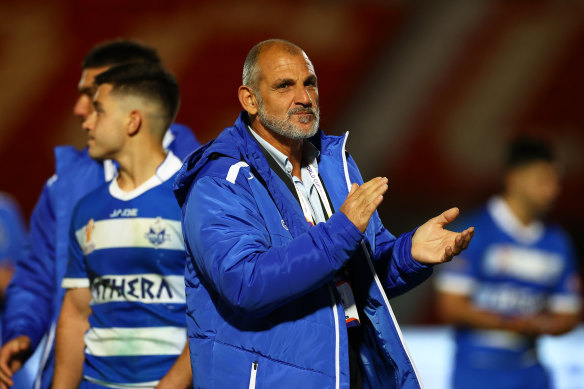 Steve Georgallis applauds his players after their loss to France.Credit:Getty

After years of political battles that make Manly’s troubles look like a parents’ group spat, the Greek Rugby League Federation (GRLF) was finally recognised as the game’s legal governing body on home soil in August.

Despite being recognised as the nation’s legitimate flagbearers at international level, political connections held by the previous administration went a long way.

The GRLF was deemed unlawful, the national side too when it tried to play World Cup qualifiers in Greece.

Police were called to halt domestic games, players were arrested simply for playing.

‘Stevey’s told me the story of how far they’ve come, all they’ve dealt with, and it’s a proud day.’

“Some of the boys have been in courthouses and police stations just for playing rugby league,” Georgallis told AAP this week. “We’d get called to help them with money for a lawyer.”

Club matches were scheduled in the middle of the night to avoid the authorities. Greece’s 2018 World Cup qualifier against Malta was played in Athens, but the rest were moved to London to save the hassle.

And that Athens outing went ahead in secret after a team official posted a photo on social media from a venue seven hours away to give police the slip.

Being allowed to play is one thing. Being able to afford it is another. 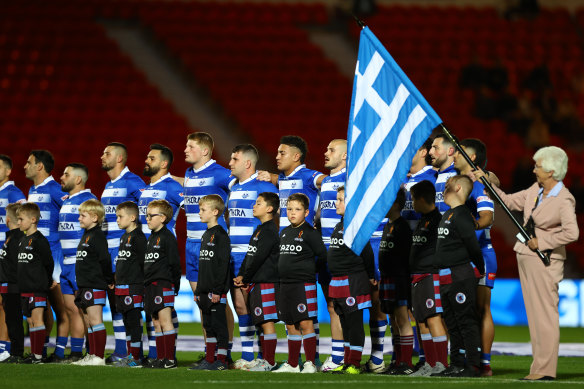 Greek players line up before their World Cup debut.Credit:Getty

“They never have any money these blokes, and it was simple really: I couldn’t not get involved,” Roosters supremo Nick Politis said.

“I’ve known Stevey Georgallis for so long and have seen how much work and effort he puts into Greek rugby league.

“They’ve been through a lot just to be here but that’s what we’re built for and the Greek way is to get on with things. Stevey’s told me the story of how far they’ve come, all they’ve dealt with, and it’s a proud day.”

Politis was in the stands in Doncaster on Monday, having sponsored the side with $100,000. There’s a nod to his home island of Kythera on the front of the Greek jerseys. Aphrodite, the Greek goddess of love and beauty, is on the back.

“I’ve had fun with that. In the Greek community we’ll argue, ‘My island’s better than yours’, forever and a day,” he said.

“The jumper’s taken off, we’re getting requests and orders from everywhere, all the Greeks are loving it.”

Meanwhile, the players won’t pocket a cent for their efforts at the World Cup. A team-wide call was made to donate their weekly stipend for the tournament to the GRLF.

World Cup qualifying rules say a maximum of four players can be selected on heritage rather than nationality, so in any given qualifier the Greek side sported 13 domestic players.

Georgallis’ squad at the tournament proper features eight Greece-based players, with the team’s financial sacrifice made to develop the local scene further.

Against the French, there was plenty to like but the gap in fitness and composure led to a 20-0 half-time deficit.

An improved second half came with several enterprising cross-field kicks and a try-of-the-tournament contender – Newtown Jets cult hero Billy Magoulias chipping in his own half for centre Nick Mougios to set off on a jinking 60-metre run to the line.

It was worthy of an ouzo, even before the last word from Georgallis.

“This is a stepping stone for rugby league in Greece,” he said. “They love playing the game. Now that they can, I think it’s only up from here.”

England vs Georgia live stream: How to watch Autumn Nations Cup online and on TV today

Young Magpie reveals club reacted to racial slur made against her