Home » Rugby » How much more does Tupou need to do to prove he’s true Blue?

He has won three premierships, an Origin series with NSW, represented Australia and Tonga, and is about to become the greatest try-scorer in the history of a foundation NRL club.

Yet, after all these years, Daniel Tupou is still having to defend his position at the top level, with his inclusion in the NSW side described as a “surprise” by some pundits amid a strong push for Josh Addo-Carr to line up in Perth on Sunday night.

Roosters coach Trent Robinson certainly believes the giant winger does not receive the public recognition he deserves, which is why “we shout it from the rooftops within our club”.

“Toops is one of the all-time greats of our club – obviously because of what he has done, but also the way he goes about the way he plays,” Robinson said.

“He sets the tone for our team each week. He has the ability to score down one end, he owns the air and carries out of the back field as good as anyone in the competition. And he’s been doing it for a decade.

“Because of his Tongan and Australian background, he’s humble, has a quiet nature, goes about his business, and that’s kept him under the radar his whole career.

“We shout it from the rooftops within our club, but it doesn’t gain that much traction outside the club.”

When The Sun-Herald flagged Tupou down for a chat on Friday after training, he pointed to himself as if to make sure it was not a case of mistaken identity. 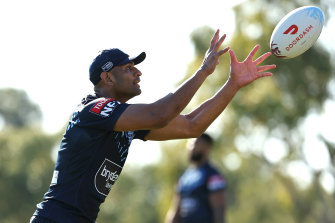 The Roosters winger training in Perth this week.Credit:Getty Images

Tupou said he was the temporary owner of the right-wing spot and that Addo-Carr would return to the position in good time. He said as much before game one.

“This is his spot, this will always be his spot. I love Josh Addo-Carr,” Tupou said.

Pressed on having to justify his selection at the Origin level, despite his sustained individual success, Tupou said: “I like to keep myself under the radar, improve my game 1 per cent at time and one day at a time.

“All the accolades and memories I’ve created, it’s special and something I’ll always cherish, but it’s on to the next job now.”

Tupou, who sits on 125 NRL tries, 14 behind club legend Anthony Minichiello, has spent a lot of time with Roosters teammate and Blues’ extended-squad member Joseph Suaalii.

“That’s the little bro right there,” Tupou said of Suaalii. “His eagerness to learn what he can, he’s like a sponge, and I always tell myself I wish I was like him at his age. It’s only a matter of time before makes his debut for NSW.

“He might learn off me, but I learn twice as much off him.”

Robinson said Suaalii’s form surge for the Roosters was largely because of Tupou’s tuition.

“When you talk to Toops, he’ll be humble and self-effacing, but he knows his job well, and passes that [information] on constantly to Joe,” Robinson said.

“Joe has learned a lot from him, and a part of the reason Joe has played the way he has on the wing – and coming from a fullback and centre role, when it’s hard to learn the intricacies of the wing – that’s been Toops passing on that information.”