Home » Rugby » How Newcastle’s premiership campaign ended in the toilet

Newcastle’s season will end like it began, with questions surrounding Kalyn Ponga’s commitment to the club.

When he signed a five-year contract extension in April, pledging his best footballing years to the Knights, it appeared that Ponga couldn’t have been any more invested. The announcement was meant to herald a prosperous new era in the Hunter; instead their campaign has literally ended in the toilet.

As the club’s captain and highest-paid player, much of the blame has, sometimes unfairly, rested at Ponga’s feet. The superstar fullback hasn’t been able to consistently reproduce his stunning State of Origin heroics, owing in part to concussions and other injuries that have limited him to just 14 NRL appearances. That has been out of his control.

However, being sprung in a toilet cubicle with Kurt Mann, at a time when their teammates were attempting to put space between themselves and the wooden spoon, speaks to greater issues at the club.

On Tuesday Peter Parr, Newcastle’s new director of football, fronted the press to announce, well, not a lot. The NRL’s integrity unit had taken over the probe into the Ponga incident and Parr declined to go into specifics until their findings were handed down.

As to whether the pair had used drugs, Parr said that the “indication to me is that it didn’t happen”. Regardless, the fact the club’s captain, at a time when he should be recuperating from repeated concussions deemed severe enough to prematurely end his season, was apparently so intoxicated that he needed the assistance of a teammate to take him to the toilet – as per the explanation offered by Ponga’s father Andre – is a pointer to the decay of the club’s once-famed culture. There are others. 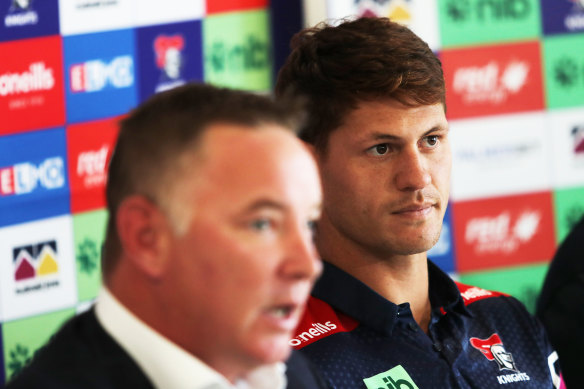 It emerged on Tuesday that Bradman Best and Enari Tuala had been stood down from the NRL this weekend for “not meeting team standards”. This on the heels of David Klemmer receiving a breach notice for not complying with the directions of a trainer. Throw in a racism row – it’s alleged a prominent staffer made an inappropriate remark to an Indigenous reserve-grade player – all in the space of the few weeks in which Parr has got his feet under the desk.

It has been a steady decline, one that began before a ball was kicked. It can be traced back to the moment a previous Knights captain, Mitchell Pearce, walked into Knights headquarters during the summer to request a release from the final year of his contract.

Despite not being able to secure a capable replacement – Luke Brooks opted against the move, despite his own challenges at Wests Tigers – the club inexplicably bid Pearce bon voyage to France. None of the alternative halves options – Anthony Milford, Adam Clune, Jake Clifford, Phoenix Crossland or Mann – have been able to cement spots or ease the burden on Ponga. The result has been a lack of results. 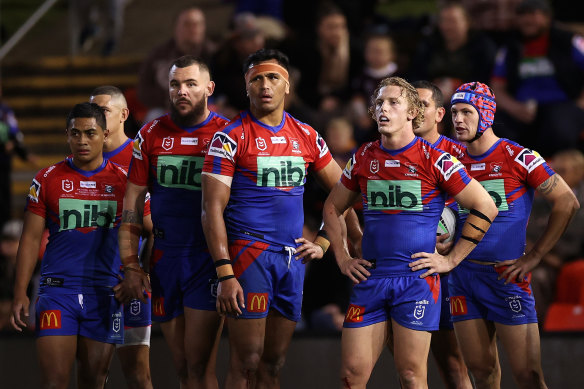 The Knights have endured a miserable 2023 campaign.Credit:Getty

An already weak roster has been further weakened by injuries, lumping more pressure on the coach. Adam O’Brien hasn’t always handled it well, conceding he sounded like an “egomaniac” when defending his credentials following a recent loss to Canterbury.

However, his most telling comment came in June, when he surveyed the state of the club and declared: “It’s not a quick fix, there’s some stuff here that’s been ingrained for – I wouldn’t say years, I would say close to two decades – that we need to get on top of and they’re not quick fixes.” One can only imagine what Andrew Johns and Danny Buderus, legendary Knights currently on the club’s books, make of it all.

Whether O’Brien gets to finish the job will depend on what happens next. In May, Knights supremo Phil Gardner told the Herald “There’s no doubt in our mind that Adam O’Brien is the right coach for us”, adding “We hope that Adam is with us for the next 10 years”. The club has been embroiled in seemingly endless dramas from the moment Gardener uttered those words.

The subsequent appointment of experienced administrator Parr was made to offset one of the major criticisms of the club, that its football department didn’t have the requisite football experience.

The challenges are everywhere; a defence that is the second-worst in the league, the stagnation of promising players and the inconsistency of others, particularly those sucking up most of the salary cap funds.

There is plenty of talent in the junior ranks – the Jersey Flegg and SG Ball sides are at the pointy end of the ladder – but it will take years for it to emerge. On Sunday, the reserve-grade team copped a 60-4 hiding from North Sydney. O’Brien was right when he said there was no quick fix.

Parr has seen plenty during his time in the game; at the Cowboys he witnessed Johnathan Thurston fulfil his undoubted potential after initially struggling with the twin burdens of talent and captaincy. Whether Ponga is up to the same challenge remains to be seen.

‘It’s not a deterrent’: NRL veterans urge rethink on fines for repeat offenders