No guts, no Rory! Sutherland was told to forget playing rugby again after suffering a career-ending groin injury that left him wheelchair-bound and depressed… now, against all odds, he will fulfil his Lions dream

Rory Sutherland should not be walking, let alone playing matches for the Lions.

After the pre-departure Japan game at Murrayfield last month, in which the Scottish prop played his first 52 minutes since March, there were tears among the Sutherland family in the crowd.

His mother, sister, auntie and wife all wore shirts with their man’s name on – not one among them would have thought he would ever make this stage five years ago.

For in 2016 Sutherland suffered one of the worst injuries imaginable, ripping both sides of his groin completely off the bone in a warm-up – an horrendous blow that saw him wheelchair bound for a month, largely bed-ridden for three, rehabilitating for 14 and told he may never take a comfortable step again. 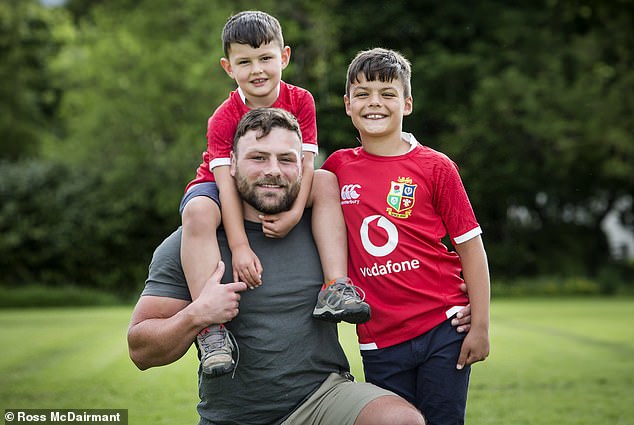 ‘I went to sprint before a game against Harlequins and it was like a shotgun going off between my legs,’ he described – admitting now he had hidden this building groin problem through his early Edinburgh matches and first four Scotland caps.

‘The adductors are made up of loads of tiny little sleeves – so I was told by the specialist – and one of the sides, maybe the right, had torn a little bit and was on its last legs.

‘Because I sprinted the left side was under so much pressure they both came off the bone.

‘I got the scan, went to see a lot of different specialists, talked to a lot of people, and every single one of them said “think of your quality of life, forget rugby – that is never going to be an option for you ever again.”

‘After my operation I spent a month at home, it failed due to a bad infection. Re-doing it they then said “this is your last chance for a normal, mobile life”.

‘I had a couple of months in the house, only getting up to go to the toilet, and when I needed to eat or drink. There are some things I will never take for granted now. 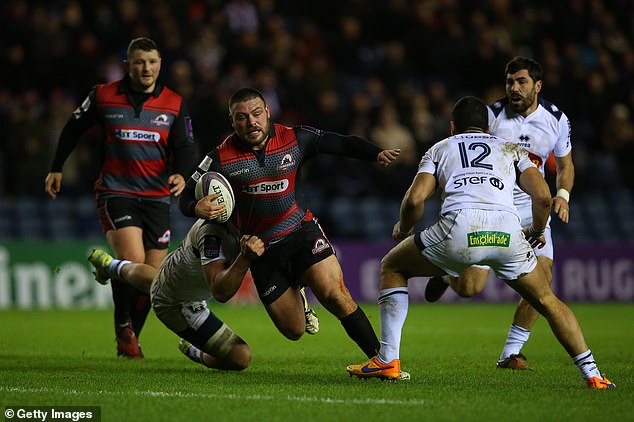 Pictured in 2016, Sutherland would rip both sides of his groin from the bone months later

‘The very first month was one of the worst experiences of my life. I would wake up, then had to wait for my wife Tammy to get up and see to the kids first, she’d get me out of bed and put me in the wheelchair, or on my crutches.

‘She’d help me into the bathroom so I could go to the toilet, make me breakfast, she was superwoman!’

Sutherland was then 23, his son Mason four and Hamish newly born. He was helpless, slipped into depression, fits of anxiety and stared into the abyss.

‘I had some horrible days lying on my bed thinking,’ he recalled, speaking exclusively to Sportsmail.

‘The first month I wasn’t even thinking about rugby, it was about my quality of life.

‘It’s something a lot of rugby players don’t like to talk about, but a huge thing for me was the financial side of things – what was I going to do if I couldn’t play again?

‘How was I going to provide for my family?

‘I went through a year of my life thinking I was a burden on them. But I kept believing I would get back. I did.’ 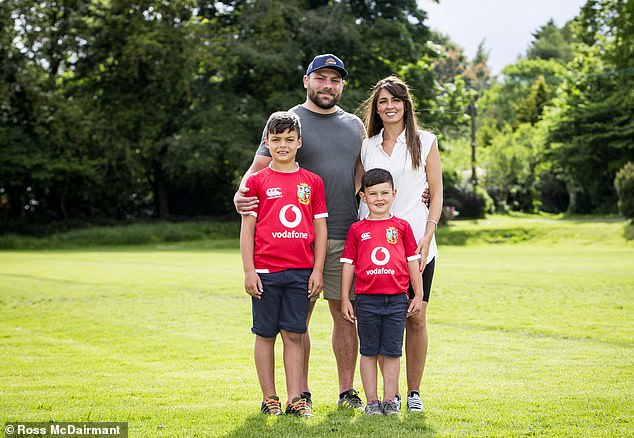 Sutherland’s wife, Tammy (top right), would help him in his recovery from that horrific injury

It is easy to see why, then, when our photographer went to visit him to take pre-tour socially-distanced photographs in his garden in Lauder, within the Scottish Borders, Sutherland was keen for his boys Mason and Hamish to be included in the pictures wearing their Lions shirts bought by grandpa Steve.

‘I wouldn’t have made it as far as I have without my family at home – a good wife and kids that are understanding of me being away all the time,’ he said.

‘That’s really important to me.’

Sutherland chuckled and shook his head slightly at the idea that during the last Lions tour to New Zealand he was re-learning how to step up stairs.

Cruelly injury struck again right at the end of the Six Nations, the loose-head hurting his shoulder in Scotland’s win against France, meaning he was selected for this trip while in rehab again.

But having played in three of five Lions tour games so far, he can laugh at that knock.

‘Out of all the things you do in rugby, mauling, tackling, carrying the ball, I did it by falling on the floor!’ he said.

‘I went to dive on a ball, missed it and popped my shoulder out the back. I got really lucky, as I didn’t need surgery.’

Sutherland’s long journey to this point has a few more notable signposts. 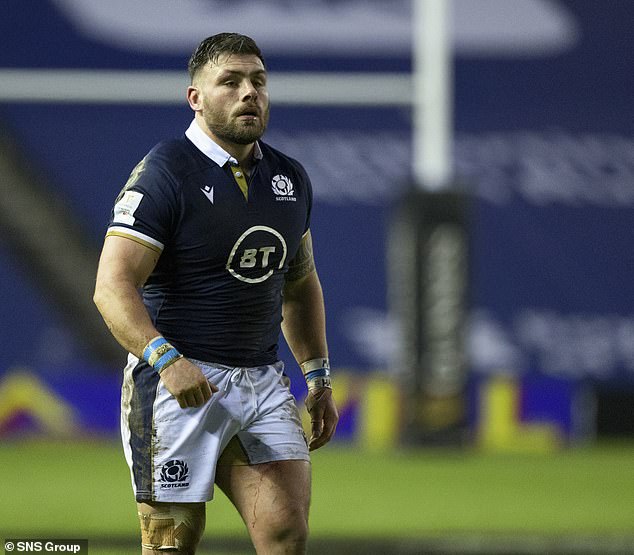 Cruelly, injury struck again right at the end of the Six Nations in Scotland’s win against France

When a teenager he played with Stuart Hogg at Hawick Albion – a picture of the young duo did the rounds when both were selected for this tour.

‘Hoggy looks so different, but apart from a beard I hardly look any different at all!’ smiled Sutherland, who moved around clubs in the Borders without initially finding his groove.

‘Mine is a big rugby family – my dad and grandparents both loved it.

‘They followed my everywhere through rain, hail and shine, to shout my name!

‘I started when I was only five in Primary One, but there were a lot of stages where I didn’t enjoy it.’

He played Scotland under-18s as a flanker, flicking between Hawick, Gala and then Biggar when the stars aligned while he was busy welding.

‘I got an apprenticeship at a place in Jed in electrical mechanical engineering,’ he explained.

‘I did a four-year apprenticeship and after that went to Morrison and Murray. I was at the work-bench welding and my phone went. I thought about not answering, but did.

‘“Hello it’s Stevie Scott here, coach at Edinburgh Rugby – we want you to come up and have a trial”.’ 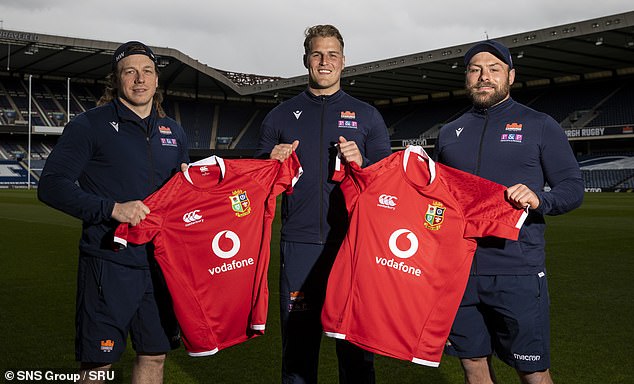 Despite the injury, Sutherland (right) was called up for the Lions’ tour of South Africa 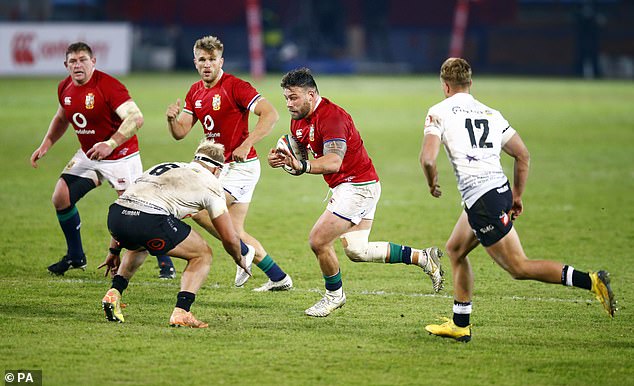 Having played in three of five Lions tour games so far, Sutherland can laugh at that knock

In truth, Sutherland was always destined to work outdoors.

A Scottish & English Championship motocross racer when 11 – ‘we used to turn up with a van, one bike and some spares. Others had a huge six-bloody-berth motorhome! We were a bit out of our depth!’ – he spends 12 hours on Wednesdays fishing with Edinburgh prop Dave Cherry at Alemoor Loch.

‘We just chuck the bait out, sit, have a few naps and wait for pike!

‘The biggest me and Chez have caught is a 15lb-er, it’s not tiny, it’s not huge.

‘It’s something we like to do to get away from rugby.

‘When I was younger I used to fish a lot with my dad and uncle. We were pictured once in the Pike & Predator magazine – we pulled a 29lb-er out, a pretty big one!

‘I look tiny, and almost scared of it. It’s ridiculous!’

Sutherland certainly felt a fish out of water when first meeting his fellow Lions in May. 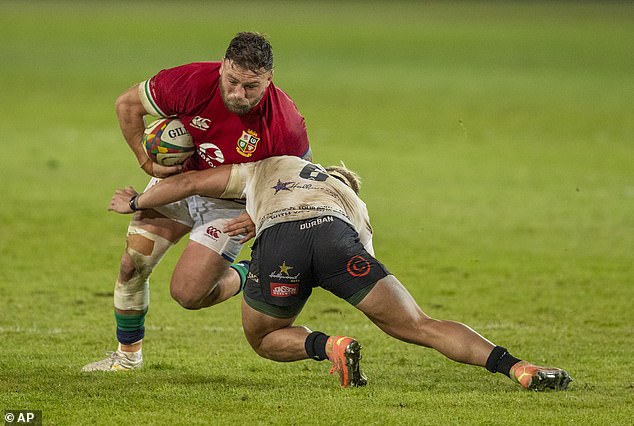 Now, five years on from that horror injury, he is pushing for a Lions Test start next week

‘You get imposter syndrome,’ he explained.

‘“Should I be here? Look at all these guys… I’ve watched them on TV for years, some of them have been on two or three tours already” you think “bloody hell”.’

But while he has brought his ‘bin juice’ budgie-smuggler swimmers, to celebrate his years spent travelling as the 24th man at Edinburgh, only there for post-match shuttle sprints to raise his heart-rate, he is pushing for a Lions Test start while pinching himself constantly.

‘F*** I’ve came a bit of a way,’ concluded the front-rower who only returned to Test rugby last year.

‘I’m so proud. When we were trying Lions jerseys for photos somebody asked me “can you put it into three words what it means to be a Lion?”

‘I miss my family massively, I’m terrible at hiding it, but this is an opportunity of a lifetime.’

Wales vs Ireland live stream: How to watch Six Nations fixture online and on TV today