Melbourne Storm coach Craig Bellamy has backed his stars to keep their heads and secure a place in the NRL grand final.

The Storm topped the league this season but run into fellow premiership favourites Penrith in Saturday’s preliminary final after the second-place side lost their qualifying final to South Sydney.

The Panthers have attempted to play mind games in the finals, with coach Ivan Cleary calling on referees to protect his son and star halfback Nathan Cleary from undue physical pressure.

Panthers back Liam Martin has pledged to again attempt to put Storm star Cameron Munster off his game after Martin goaded Munster into kicking out at him during State of Origin.

Bellamy gave a prompt “I ain’t going there – next question” when asked if Ivan Cleary’s complaints would influence referees on Saturday and the Storm will continue to pressure the Panthers playmaker. Prop Christian Welch is expected to lead the charge on that front.

Taking away Nathan Cleary’s time to kick has been a hallmark of the Storm’s defensive tactics, so much so that the Panthers have reportedly been trying to illegally block opposition defenders. 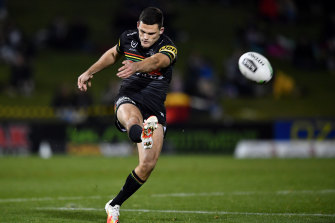 Nathan Cleary’s kicking game has been a big talking point during the finals series.Credit:NRL Photos

“We want to try and do that [pressure Cleary] – if he gets his own way, they will be hard to catch,” Bellamy said.

“We have practised that a bit this week and we want to give him as little time as possible to pick his spot and hit his kicks like he wants to hit them.”

Munster has both shined in big games and had difficulties in others but Bellamy said the Queensland playmaker was primed to step up and won’t repeat his run-in with Martin.

“He got fined for that one and it would have hurt as Munster doesn’t like to spend money,” Bellamy said.

“He’s one of our most experienced players and he seems to go up a level in the big games, so we are hoping he can do that on Saturday night.”

Melbourne have leading try-scorer Josh Addo-Carr back from a hamstring injury. Bellamy said it could be the strongest side the Storm have fielded all season.

Bellamy thinks his side is “mentally refreshed” after a week off but needs to keep the players’ focused on their job.

“There are things in our game that we do every week that are important to us as a footy team so they’re the things that we’ll be looking to do on Saturday,” Bellamy said.

“We’ll be sticking to our basics, and we want to do them really well. And if we do that, we’d like to think we’re going to be a chance.”

Keeping their mind on the job will be even more important in the first finals campaign without retired captain Cameron Smith. The Storm topped the league without him but Bellamy is aware his absence in a high-pressure preliminary final could hurt his team.

“You don’t lose a guy who played for 20 years at such a high level and not miss him at some stage,” Bellamy said.

“We’ve done a reasonable job of that so far in making up for that and we have to do the same on Saturday.”

The Storm play the Panthers in a preliminary final at Suncorp Stadium, Brisbane on Saturday at 4pm.

How much longer can PVL and NRL hold out with coronavirus?