Home » Rugby » ‘I don’t want to do it’: Bennett rules himself out of running for Maroons job

Wayne Bennett won’t return to coach Queensland next year after ruling himself out of the role.

The Queensland Rugby League is on the lookout for a new coach after Paul Green stepped down from the role on Tuesday. The decision was made because Green is keen to return to NRL coaching as soon as next year, while the Maroons want a coach dedicated solely to the task of reclaiming the State of Origin shield. 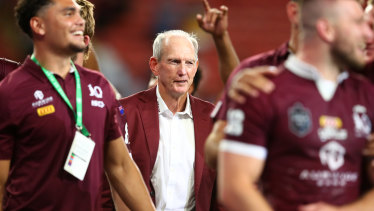 Bennett seemed the obvious choice given his plan to return to Queensland next year, his previous success in the role and the fact he is stepping down as South Sydney coach at the end of the current campaign.

However, Bennett said he won’t be filling in the void vacated by Green.

“I’ve told them I won’t be doing it so everyone there knows that,” Bennett told the Herald.

Asked why he chose not to pursue the role again, Bennett said: “I just don’t want to do it … I’ve got no plans [for next year].”