Home » Rugby » ‘I had a tear in my eye’: Winmar touched by Addo-Carr gesture

Nicky Winmar wants to meet Josh Addo-Carr and thank the NRL star for his tribute, which brought a tear to the St Kilda legend’s eye.

Winmar’s momentous 1993 stance in the face of racism from Collingwood supporters at Victoria Park was recreated by Melbourne Storm winger Addo-Carr who raised his jersey and pointed to his skin before the Indigenous All-Stars clash with the Maori All-Stars on the Gold Coast on Saturday night. 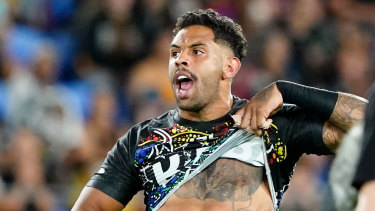 Josh Addo-Carr on the Gold Coast on Saturday night.Credit:AAP

“I would love to catch up with Josh next time I’m back in Melbourne. Say thank you and wish him all the best for his career.”

Addo-Carr said Winmar’s act had made a profound difference to Indigenous Australia. 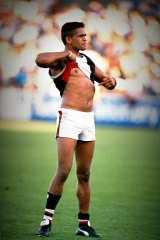 “I thought about that picture during the week and I thought I might do it,” Addo-Carr said.

“I thought it would probably make a few people angry but I’m very proud of it.”

“There is a great story behind the photo, and I’m really proud that I did it. Maybe it would make them uncomfortable. But it’s a proud moment for everyone."

Winmar also said he was touched by the Indigenous All-Stars’ treatment of nine-year-old bullying victim Quaden Bayles who led the team onto the ground on Saturday night.

The former Saints champion said that he, too, had been a victim of bullying as a child, remembering that as a child growing up in Pingelly, Western Australia, other kids had chosen not to sit next to him because of his race.

His message for Bayles was to “stand proud.”

“It’s a wonderful tribute, especially for that young kid Quaden Bayles. I was pretty emotional for him as well, because bullying is one of the main things that we’ve got to stamp out of schools as well.

The photo of Winmar, taken by Age photographer Wayne Ludbey, is among the most iconic images in the history of Australian sport and has been immortalised by a statue outside Perth's Optus Stadium.

Raiders have most to lose from Storm resting players, but Stuart’s a fan