Home » Rugby » ‘I had to grow up’: How Milne turned his life around after drugs dramas

Taane Milne considers where he is now, the opportunities squandered and those only recently taken, and sums up his journey this way.

Milne has done a lot of growing up since he began his footballing career. The South Sydney winger is just one win away from a grand final appearance, a destination that appeared inconceivable after his Wests Tigers contract was torn up in 2018. Having come to the joint-venture outfit after a stint at the Roosters, where his dedication was questioned, he almost blew a promising career when he was sacked for failing a second drug test.

“At the end of the day I’m not making excuses, but that’s what happens when you have alcohol early, that drinking environment,” Milne said.

“I was a young Maori from New Zealand coming into big Sydney. I had to grow up as a person. When I was younger I had these opportunities that I took for granted. Those temptations, you need to learn how to say no.”

During his sabbatical, Milne worked in his stepfather’s carpet business. It was a timely reminder of how good he had it as a professional footballer. 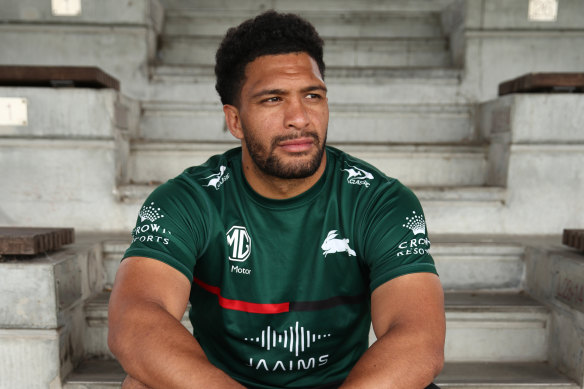 Taane Milne has turned his life around at South Sydney.Credit:Getty

“I did that for half a year,” he recalled. “I know how to do it, but picking up a carpet or kicking a footy around – I’d rather kick the footy around. It’s hard work and when you have an opportunity, there’s no time to waste.”

The Warriors threw Milne a lifeline the following year after he penned a heartfelt letter to then-coach Stephen Kearney, in which he promised to turn his life around. However, he made just the one first-grade appearance for the club, rupturing his ACL in the first game of the 2020 season.

It was another setback that could have been a career-ending one. However, the time spent in his native New Zealand didn’t go to waste. The former Junior Kiwi reconnected with family during what was a 13-month knee rehabilitation.

Unable to play due to injury and the COVID-19 shutdowns of the lower grade competitions, Milne begged South Sydney coach Jason Demetriou for one final chance. The pair have a relationship from their time at the Illawarra Cutters, where they combined to win a premiership in 2016. 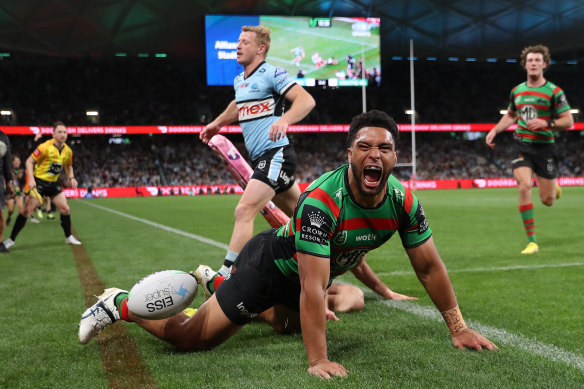 Souths winger Taane Milne scored two tries against Cronulla, taking his total to 18 over the past two years.Credit:Getty

“He’s always had that connection with me when I’ve had my little stuff ups, he would ring me up to try to pull my head in,” Milne said. “When the opportunity came to come over here, after I did my knee, I was harassing him on the phone, going ‘Get me over there.’”

The move eventually happened last year and has been beneficial to both parties. While Alex Johnston hogs the headlines for his try-scoring feats on the left wing, Milne has given the Rabbitohs a strike target on the right.

Sin-binned twice in the opening weekend of the finals, Milne scored two tries against Cronulla, taking his total to 18 over the past two years. “I swapped the yellow cards for tries last week,” he grinned.

More importantly, Milne has got his life back on track. With the support of Demetriou, partner Casey, mother Shannyn and step-father Manu, the 27-year-old is finally fulfilling his potential.

“I’m proud of the man I’ve become,” he said. “Without all that stuff that happened when I was younger, I probably wouldn’t be here today.

“I could still be doing the drinking and that if I didn’t get caught. I can still have a beer, I’ve been through counselling to help me around alcohol. Now I can have a controlled beer, I can have one beer, two beers.

“It just comes down to the people you hang out with as well, surrounding yourself with people who want to do well. I’ve worked that out in my life, how to manage that. I’ve learnt how not to have a beer.

“We’ve got a big final this week, I’m not having a beer. Before I wouldn’t have cared, I would have had a beer. Now I’ve grown and the missus has put her foot down. I have to be a man now.”

Stream the NRL finals series live and free on 9Now.

Rennie could walk as Wallabies coach if Castle is axed