Home » Rugby » ‘I have some pretty dark days’: Lion’s bravery after personal tragedy

Every time Archie Smith prepares for a game, he writes three letters on some tape on his wrist: Bas.

The phone call came two days after Smith, the Brisbane Lions-listed ruckman, and fiancee Sophie Catsoulis had celebrated their engagement party last November. That was the last time Archie saw his brother.

Two days later he received the news. Bas had taken his own life. He was 21.

A family just the same 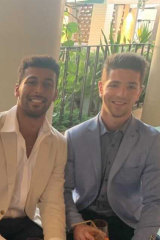 Archie and Bas didn’t look much alike. They shared a biological mother, Willi, who met Bas’ dad Anthony when Archie was 18 months old, raising Archie and older sister Gemma. Anthony and Willi had three kids together: Bas, four years younger than Archie, Isaac and Violet. In 2007 the family adopted another son, Abib, from Sierra Leone.

“He’s your first brother, so it’s like your prized possession,” Archie said.

“What we differed in looks, we gained in how close we were,” Archie said of his relationship with Bas.

“I’ll never forget this. He was about 10 years old and he found out that my stepdad was my stepdad. He had no idea. He was like ‘what do you mean, Archie’s got a different dad’. He was devastated. We were so close, and it was so normal in our family.”

‘I told him that I loved him’

Bas was super sporty. Archie describes him as “a bit of daredevil”. Bas would jump from trees into ponds. But he also had a sensitive side. He was compassionate and fiercely loyal.

As Bas got older though, he struggled with his identity.

“He really didn’t like what he saw in the mirror and I just remember he would often speak very lowly of himself and we would always be like ‘why are you speaking like that?’ He just convinced that he was basically worthless. That was the most tragic thing, that what we said held no weight. He had told himself that he’s not good enough,” Archie said.

There were better times and worse times. There were periods when the family thought Bas was making progress.

“We thought he was in a really good place at my engagement party, then 48 hours later he’d gone,” Archie said.

“I’m grateful that the last time that I saw him, I told him that I loved him.”

How does anyone deal with that sort of loss? Archie was still mourning the loss of his grandfather, and dealing with the health battles of his niece Indi, born with a rare condition that had required several bouts of major surgery. His was compounding grief. 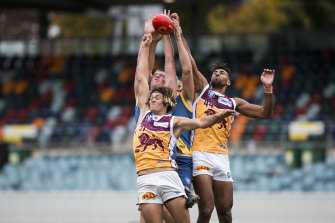 Yet two days after Bas’s funeral, Archie was back at pre-season training.

“All my life, in any instance of anything happening, my first though is to move on and try not to think about it too much,” Archie said.

But it wasn’t working. Archie was averaging just three hours’ sleep per night, crying most days in his car.

“I was getting to training most days an hour early, just sitting in my car, trying to psych myself up.”

He hurt his shoulder and his Achilles, and the Lions knew something had to give. They intervened, sending Smith to do his rehab remotely on the Gold Coast with Sophie. It was much-needed therapy.

When Archie posted news of Bas’ death, he was inundated with social media messages from members of the public who had endured similar. He wanted to help send the right message. So through youth mental health not-for-profit Headspace, Archie decided to release a video of his family’s story.

He became literate in appropriate language for talking about suicide. He also started promoting the push-up challenge, a mental health fundraising initiative. He ventured back to his old school, St Laurence’s Colllege, and was moved to see all the students pressing down on the ground. After months there were tears of joy, rather than tears of despair. He went to another session at local club Morningside, speaking to the loved ones of a junior player who had also died way too young.

And he has decided to go public with his own diagnosis of depression, one he has dealt with for five years. 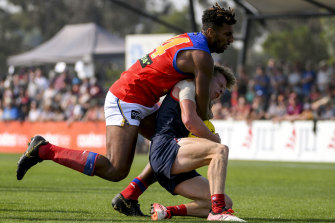 He had hidden it from teammates, but decided he had to practise what he preaches: the need to speak up.

“My biggest fear was that I was going to be treated differently,” Archie said.

“I have a really close group of boys who can tell when I’m not Archie. They’ll just text me from across the locker room and ask ‘are you all right today?’”

The hole in his life

Archie Smith turns 26 on Monday. It’s a milestone he is partly dreading: a birthday without Bas. His brother was also supposed to be a groomsman at his wedding later in the year. It just won’t be the same.

“I think about my brother every single day, and some of those days are really tough, particularly when at the same time I’m in a pretty high-pressure environment as a footballer. I’m hitting some good form in the VFL and I just want to have a really strong end to the year as a footballer.

“There’s going to be good days and bad days … I have some pretty dark days.

“I’m going to have to deal with that for the rest of my life.

“What’s been the biggest struggle since the funeral ended is that life is moving forward for everyone else … but for us it’s been more and more noticeable that there’s this huge gap missing, and that’s him.”

‘It might put a target on my head’: Luai roars defiance as THAT Origin photo riles Maroons

Undermanned Eagles outwork Carlton to all but end Blues’ season