Home » Rugby » ‘I was praying he pulled out’: Crows coach on Doedee clash

Adelaide coach Matthew Nicks has admitted he was praying that courageous Crows defender Tom Doedee pulled out of the marking contest that left the 24-year-old subbed out of Friday night’s match with concussion and blurred vision.

The frightening first quarter collision between Doedee and Essendon forward Anthony McDonald-Tipungwuti happened when Doedee charged back with the flight of the ball into the leading McDonald-Tipungwuti, who flew for the ball under pressure from Adelaide’s Chayce Jones.

Doedee left himself open and vulnerable and felt the full force of his strong-bodied opponent, with Nicks saying he did not want his player being so fearless that he put himself in that position. 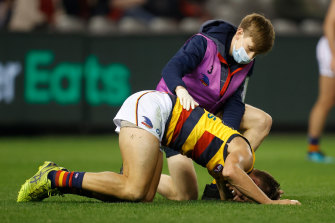 Tom Doedee of the Crows lays injured during the match between the Bombers and the Crows at Marvel Stadium.Credit:Getty Images

“It’s something we have got to keep working on. I’m not sure that ball is ever there to go for. Tommy is so courageous. To tell him to stop doing that, [and] we take away what has been his weapon to this point in his short career,” Nicks said.

“He loves the contest. He embraces physicality, he wants to put his body on the line for his team. It’s just a matter of when or where, but at the time I was praying he pulled out.”

Doedee said on social media he found out the hard way that someone was coming in the other direction, having been subbed out with concussion and a sore chest.

The incident was just one part of a shocking night for the Crows, with Nicks apologising on behalf of the team for “embarrassing ourselves tonight on a big stage”.

Nicks did not hold back in lambasting their performance, his disappointment obvious.

“The effort wasn’t at the level it needs to be to play AFL footy,” Nicks said.

“It’s a hard one to swallow. This one is a huge step backwards. We didn’t bring much of a fight, unfortunately.”

His Essendon counterpart, Ben Rutten, once again refused to speculate on the Bombers’ finals chances with the win boosting their percentage by nearly five points to 103.4 and keeping them on the heels of West Coast and the Giants. 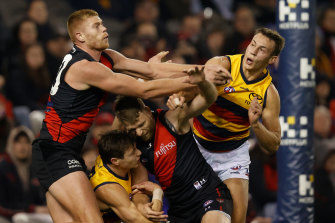 “It was another step forward in our journey and what we want to get to, and that is more of a consistent performance. [We] showed some good maturity,” Rutten said.

Rutten revealed he had considered giving first year players Nik Cox and Archie Perkins a rest, as they appeared to be tiring in recent games, however he decided it was good for their development to give them the chance to work through a dip in form.

Rutten said, once he was certain their confidence was not being affected and their risk of injury had not increased, he was happy to play them as they were keen to keep going.

The only concern for Essendon was a potential hamstring strain for midfielder Kyle Langford.

London Irish's final game of the season at Bristol is CANCELLED