Melbourne's road back from hell took another detour as Sydney threw a twist into the race for the eight with an upset victory in Cairns.

The Swans are supposedly counting down the clock until the end of the season, and their opponent playing for a spot in the eight, but it was hard to tell which was which on Thursday night. 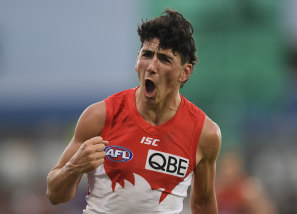 Justin McInerney starred as the Swans stunned the Demons in Cairns.Credit:Getty Images

Josh Kennedy wound back the clock in the engine room alongside Luke Parker, whose 24 touches was complemented by two vital goals.

"Joey's [Kennedy] missed six weeks, even the best take a couple of weeks to get going again," Longmire said. "He was good tonight. They were disappointed our midfield group last week. A couple of strong leaders in Parker and Kennedy led the right way and the young fellas jumped on board with that."

The talking point from the game, however, will be the Demons' poor effort with so much at stake.

The club made a documentary titled To Hell and Back in the pre-season, the inference clearly being they would return to the finals after a horror 2019.

Their finals fate is now up in the air, with the game in a fortnight against Greater Western Sydney set to decide their season.

Having fought their way into the eight with a spirited win over St Kilda last week, the Dees followed it up with the type of performance their long-suffering fans have become accustomed to. Former skipper and club legend Garry Lyon summed it up at half-time.

"This is such a Melbourne thing to be doing at the moment, as much as I hate to say it," Lyon said on Fox Footy. "Get themselves in the eight against a team said to be down below them, no intensity."

He was spot-on. The warning signs were apparent in the opening minutes when they allowed the Swans to walk through tackles from the centre bounce, and had multiple players sucked into the contest like bees to a honey trap.

They became alarm bells by half-time when the Swans built what proved to be a match-winning 28-point lead.

They had several chances late to make a game of it but Ed Langdon and Max Gawn both fluffed shots from close range.

Despite a decent breeze at their backs in the opening term, the Dees' first goal did not come until 18 minutes into the quarter.

Though the game was being played predominantly in their attacking 50, they could not break down the Swans' defence, due as much to their inability to match their opponent's intensity and their shoddy ball use. 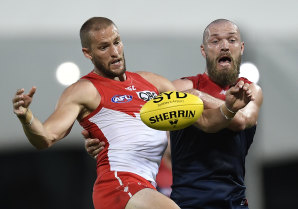 Two goals and a three-point lead appeared below par, and so it proved when the Swans cut them apart in the second.

Playing with brain not just brawn, the Swans kicked the ball to the favour of their forwards instead of going purely for distance.

Already without Lance Franklin, and with Sam Reid and Tom Papley goal-less, the Swans found scores through unlikely sources – none more unlikely than McInerney, who kicked two in a matter of minutes as Sydney's lead stretched towards five goals.

The Age Footballer Of The Year award: Round 17 Votes