Richmond star Bachar Houli says he injured his calf in the opening minutes of Saturday night's grand final, but played out the game despite initially thinking he was "done".

Though he said he felt his calf "pop" just minutes after teammate Nick Vlastuin was knocked out, a message from coach Damien Hardwick inspired him to carry on. 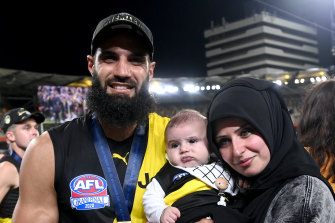 "I actually did my calf about two minutes after Nick Vlastuin got knocked out," he told Triple M radio.

"I thought I was done, but the great man 'Dimma' said 'I need you for this, I need you to battle on'.

"I'm so proud to see the boys put in that effort."

The triple-premiership player said his calf had been tight pre-game but he had not thought anything of it "because I'd been in that same situation two times in the last probably six weeks".

"I sprinted across the ground and it popped. I thought that was done. I just knew there was no next week and I wanted to give it all I got."

Houli missed a chunk of the season, delaying his journey to the hub to be with his family. His wife gave birth earlier this year, and his mother was in intensive care for a time after testing positive to COVID-19.

"I'm so proud, the amount of sacrifices our family has made – all players and their families have just been extraordinary," he said.