Home » Rugby » ‘It took its toll on me mentally’: Why Corey Norman needed a break

It was fitting Corey Norman spent some of his summer holidays in the Lost City Of Petra because that's how he felt towards the end of last season.

As it dawned on him that he was set to finish yet another campaign in a team that had finished closer to last than first, despite him having made an Origin debut earlier in the year, Norman admits he was no longer enjoying his football. 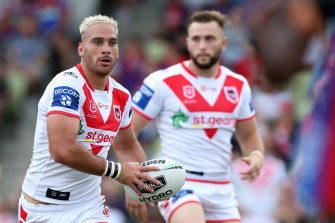 Corey Norman in action for St George Illawarra in a pre-season trial against Newcastle.Credit:Getty Images

So, after a blunt season review with St George Illawarra coach Paul McGregor, the five-eighth packed his bags and headed abroad to Bali, Dubai, Egypt, Jordan – including the prehistoric city of Petra – Turkey and Japan, where he spent Christmas.

As he prepares to play in Saturday's Charity Shield in a new roving role in the halves, the normally jovial Norman, who is now part of the Red V leadership group, told the Herald how much of a mental drain the game had become.

"I really wanted to get away and freshen up," Norman said. "I knew I wasn't up to scratch at the end of the year and it took its toll on me mentally.

"I haven't shied away from the fact I need a big year. That doesn't mean coming up with the big flashy plays, it means me doing all the little things right and helping my side get into the finals."

Norman did not arrive at the Dragons until midway through January last year, and relished the full pre-season this time around. 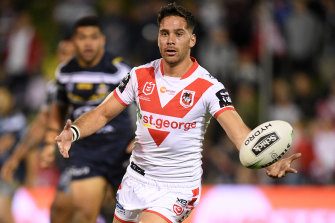 Always regarded as the life of the party, Norman, now 29, was impossible to miss at last week's trial against Newcastle because of his bleached-blond hair.

"I wanted to see how it looked on me. 'Gutho' [Clint Gutherson] told me, 'That's old news, bra','' said Norman in reference to the Eels skipper who appeared with a similar peroxide look in the new year.

McGregor said Norman had bounced back to training in such a big way ''he forced his way into the leadership group''.

"We still want him to be light-hearted and that person you want to be around away from training, but we really need him present on the field and at training and in the games,'' McGregor said.

"Him and [Hunt] have been very enthusiastic about the ownership of this team. I didn't get to have 'Normy' until January last year, but he's embraced the change and new direction the club is going in.

"He'll be a big part of it. The players want him and Ben to own this team. That's a big one for him. At the moment he's doing everything the right way.''

Edwards backs depleted France to put up a fight against England