It’s easy to accuse the NRL of wowserism after it sent Cronulla’s Toby Rudolf an official warning for his post-match comments about his potential post-match antics after victory of the Dragons.

Part of his cunning plan was to have “1000 beers” and then “try and pull something. Anything will do” at Northies Hotel. In reality, he was probably going to have an ice bath and a good night’s sleep before recovery the following day. 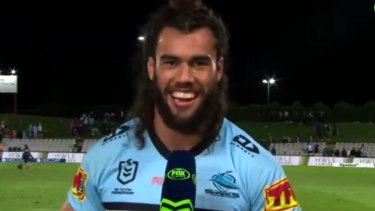 Toby Rudolf during his Fox Sports cross. He has been warned by the NRL for the contents of the interview.

But this was the ultimate no brainer for the suits at NRL HQ, especially in the context of a week where the treatment of women has been front and centre in the nation’s consciousness. On Monday, thousands joined the March 4 Justice rallies around the nation to protest against sexism and gendered violence.

One of its former stars, Jarryd Hayne, has also been in court this week as he faces two charges of aggravated sexual assault inflicting actual bodily harm on a woman in her bedroom on September 30, 2018. He has pleaded not guilty.

That’s not to mention the vital work women play in the code on a daily basis, from the grassroots clubs right to the top level of the code, and the immense effort the NRL has put in to change the game from one where the most-visible women were the ones waving the pom-poms.

Now, polished female presenters are front and centre in the game’s coverage and and girls around the country can aspire to be like the stars of the NRLW, which has helped showcase a whole new generation of talent to a wider audience.

You can’t help but wonder how a comment like Rudolf’s would have gone down if it was made to a TV show host of the opposite sex. There is ample room for characters in rugby league; they just don’t have to be based on 1980s stereotypes that have long since been consigned to history.

When is the British and Irish Lions tour and will fans be allowed to travel?