A dubious decision to send Jazz Tevaga to the sin bin has cost the Warriors any hope they had of a fairytale finals finish, as Parramatta booked a top-four berth with a 22-16 win.

There's no doubt the Eels were eventually deserved winners in front of a boisterous, Parramatta-heavy, 4577-strong Central Coast Stadium crowd. But there's also little doubt referee Grant Atkins changed the game when he sent Tevaga to the sin bin midway through the first half. 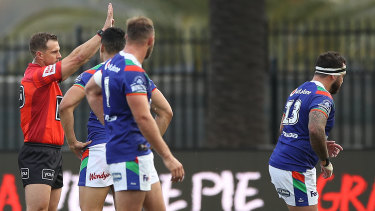 Jazz Tevaga of the Warriors is sent to the sin bin.Credit:Getty

Against the old Warriors, those next 55 minutes would have been a breeze. The Todd Payten Warriors ensure every game is anything but.

Instead of folding up, the Warriors spent the remainder of the first half putting two try of the year contenders together – both to Chanel Harris Tavita.

The playmaker's first try came when the home side used nine sets of hands and two kicks in a frenetic passage of play which epitomised their off-the-cuff attitude.

If that miraculous effort didn't give the home side a whiff of a fairytale finals finish, Roger Tuivasa-Sheck certainly did when he split the Eels 25 metres out from his own line.

The inspirational Warriors skipper set sail for the Eels' line, ran 65 metres and offloaded the ball in the direction of Kodi Nikorima's ankles.

The playmaker managed to get a foot on the loose offload and Harris-Tavita was there once again to clean up the crumbs.

He scored and set up a fascinating second half. After two miracle tries, the Warriors trailed 16-12 at the break.

After 25 tense second-half minutes, Waqa Blake caught a cross-field kick and scored. That should have been all the Eels needed to book a guaranteed top-four ticket.

But once again, the Warriors lifted themselves off the canvas.

Quick hands down their left edge – which caused the Eels headaches all evening – paid dividends for Gerard Beale and Hayze Perham.

The former grubbered into the in-goal for the latter, Harris-Tavita slotted the conversion from the left sideline and, with 10 minutes to play, the dream was still alive.

But another dubious Atkins decision to not penalise Brown for seemingly tackling Tuivasa-Sheck in the air led to the Warriors giving away an offside penalty.

Mitchell Moses took the two points, kicking the Eels into the top four and booting the Warriors out of the finals race.

The Eels didn't emerge from the match unscathed, either.

He watched the remainder of the match from the bench.

AFL round 14 teams and how the experts tipped