Josh Morris has been granted a release by Cronulla, bringing an end to months of speculation about his future.

Morris will join twin brother Brett at the Roosters after the Sharks' round two clash against the Storm. 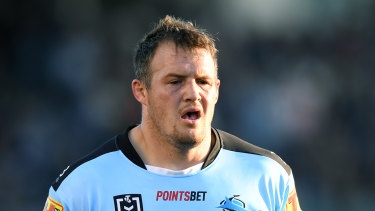 Josh Morris is free to join the Roosters.Credit:AAP

"After much internal discussion and following lengthy negotiations with the Sydney Roosters, the release request has been granted ultimately due to circumstances surrounding the Sharks salary cap, a situation which has been impacted by previous infringements," the Sharks said in a statement.

The Herald last month revealed the Sharks needed to shed a player before the June 30 deadline to ensure they were salary cap compliant.

While they would have preferred that player to have been paid more than Morris, they will now be able to sneak under the cap and avoid further penalties.

Morris spoke at Cronulla on Wednesday.

"It's a bit of a relief. Obviously there has been a fair bit come out over the past month or so, so yeah, it's good to have an end date," Morris said.

"I owe it to the boys here for the next two weeks to give my best to them and to start their season off well."

Morris said it had been tough watching on as his character was called into question by Sharks fans who did not want to lose the veteran centre.

"A lot of things have happened in the background for this to happen and the fans don't get to see all of that," he said.

"I've just tried to be as professional as possible and try turn up to training every day and do my job."

The 33-year-old pointed to joining his brother Brett at the Roosters as the driving factor in the decision but did admit he was "unhappy" when the club brought Jesse Ramien back from the Knights.

"Obviously that was the main attraction. The opportunity arose and there is obviously salary cap issues here," he said.

"As a centre you are, I guess, unhappy someone has been bought in your position but (coach John Morris) has a job to do and he has got a plan for the future.

"I understand that as well. Football is a business and you see that happen. I just had to move on with it and keep being professional."