Home » Rugby » It’s a win-win for Daniel Cross, while Hawkins says Libba’s the man to stop

Bulldogs legend Doug Hawkins says Tom Liberatore is the man Melbourne have to stop if they are to break a 57-year drought and claim this year’s premiership.

The 29-year-old midfielder ignited the Bulldogs’ engine room with the first two clearances of the preliminary final to set them on course to victory. 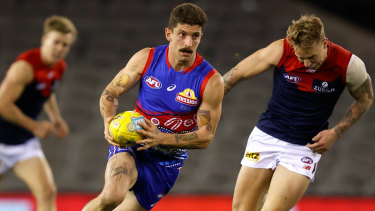 Tom Liberatore in action during the round 11 match between the Western Bulldogs and Melbourne at Marvel Stadium.Credit:Getty Images

However, he was tagged out of the match the first time the two eventual grand final teams met in round 11 when Demon James Harmes sat on him at stoppages and restricted him to a season-low 17 touches. But he performed better in round 19 in the same match-up, gathering 27 disposals as the Bulldogs kicked crucial goals from stoppages.

“He is a terrific player,” Hawkins said.

“He is the man to stop. Don’t worry about ‘The Bont’ (Marcus Bontempelli) or Bailey Smith, Melbourne need to stop Liberatore.

“He is the engine room, and he is hard and tough like his old man.”

Hawkins, who played 329 games with the Bulldogs before spending one season with Fitzroy, said he is as excited about the Bulldogs being in a grand final this season as he was when they made their first grand final for 55 years in 2016.

He said he was also rapt for Melbourne supporters to have the chance to see their team in a grand final, and said it was hard to believe the two teams who often were at the wrong end of the ladder during his career were playing each other in a grand final again after meeting in 1954.

Hawkins, who was a champion wingman, said he was thinking of the battles he used to have with Demons champion Robert Flower – who died in 2014 – during their respective careers as the game loomed.

“The great, late Robbie Flower will be looking down, don’t worry about that,” Hawkins said.

Young Bulldogs wingman Smith, who has so far kicked eight goals this finals series, has impressed Hawkins, too. 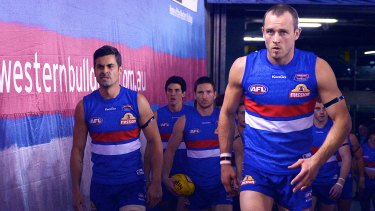 Daniel Cross walks out on to the ground to face the Demons in 2013.Credit:Joe Armao

“The kid is fantastic,” Hawkins said.

“He’s got a little bit of swagger, a lot of flair, tremendous courage, plays both sides, and [has] good balance. He is a pretty good kid at 20.”

Another former Bulldog, Daniel Cross – who did not taste premiership success at the club before finishing his career at the Demons and then working in the football department there – said he was finding it difficult to decide who to support, but he would be pleased regardless of the result.

“It is going to be really hard for me, to be honest,” Cross said.

“It’s a win-win for me. I have got guys I have played with at both clubs, some really good friends in terms of being teammates and working with guys at Melbourne in high performance. I also know staff members at both clubs … you could see it unfolding as the season went on. It was great to watch for my family.”

Cross played alongside Tom Liberatore, Lachie Hunter and Easton Wood in his final game with the Bulldogs in 2013, while Christian Salem, Max Gawn, Angus Brayshaw, James Harmes, Tom McDonald, and Jack Viney played in his last game for the Demons in 2015.

Those nine will play in this year’s grand final, while Christian Petracca and Alex Neal-Bullen were also at the Demons when Cross retired.

“The talent was obviously there,” Cross said.

“It was pretty obvious to see. It is no real surprise to see where they have ended up as a group.”

‘I heard bikies were after me’: Fonua-Blake shoots down wild rumours over Warriors switch