The race for the AFL's top eight has opened up beautifully for Greater Western Sydney but gun defender Nick Haynes admits the football they are currently playing would not stand up in a big final.

Haynes was a clear best on ground in Thursday’s nine-point win over Carlton, which lifted the Giants into eighth on the ladder, and if they win their remaining three games they will qualify for a fifth successive finals series. 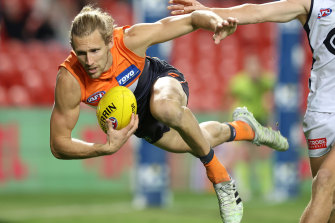 Nick Haynes was the best player on the ground in the Giants’ comeback win over Carlton.Credit:Getty

But their poor starts are becoming a major concern, with the Blues holding GWS to just two goals across the first three quarters before Leon Cameron's men finally clicked into gear and overturned a 15-point deficit in the final term.

While it would have been a different game had the Giants kicked straight in front of goal, the reality is that in four of their last five matches, they have only kicked a maximum of two first-half goals.

"To be able to come back after a three-quarter deficit and win, that's a positive. We know we're always in the game but we want to be starting games better," Haynes said.

"Because if you're not on – if you're not using the ball well or you defence is slightly off or if you're missing goals – it's going to cost you games in big finals.

"We've got to figure that out in the next few weeks and start stringing together some four-quarter performances."

Tuesday's clash against bottom-placed Adelaide, who finally broke through for their first win of the year last week, should provide GWS with an ideal chance to fine-tune those elements of their game – although Josh Kelly (concussion), Harry Perryman (calf) and Brent Daniels (hamstring) will all need to pass fitness tests to take their place in the 22.

In essence, the finals series begins a fortnight early for the Giants. After the Crows, they face must-win clashes against Melbourne and St Kilda, two teams also battling to secure their spots in the top eight.

Meanwhile, Haynes said the stunning emergence of key forward Jake Riccardi has given GWS a huge lift beyond the 20-year-old's contributions in attack.

Riccardi sparked their comeback against Carlton with back-to-back goals, bringing his AFL career tally to eight in three games and again showcasing his ability to stand up in big moments.

Haynes said it was clear from early in pre-season that Riccardi – who was overlooked in two national drafts and last year's mid-season draft before he was handed a chance by the Giants – had all the tools necessary to play at the top level.

"None of us expected him to go this well in game three but we'll take it," he said.

"He's playing with confidence. To play as a key forward in AFL footy you need self-belief and to be able to run out a game and he's got both of those.

"For him to have an impact in all three games so far has been a major boost for us and our forward line and adds another dynamic to our team."