Quade Cooper’s mature new outlook has won over many fans, but none so surprising as the young playmaker he is set to face off against when the Wallabies take on England this week.

England No.10, Marcus Smith, revealed how much Cooper had helped him when the pair connected over “socials”. 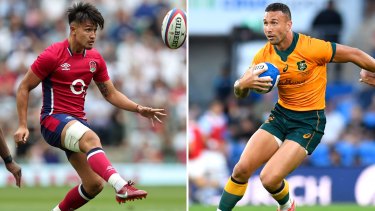 Marcus Smith has been taking ‘mindset’ cues from Quade Cooper as the pair prepare to face each other when England take on the Wallabies this weekend.Credit:Getty

The two playmakers are 11 years apart but share many similarities, not least of which are the mercurial attacking gifts that catapulted both to the top of international sport, a decade apart. Smith is entering his second season as England’s first choice five-eighth, while Cooper is hoping to continue a late-career resurgence with selection this week.

The veteran Australian playmaker mixes up his regular Instagram offering of fashion and footy highlights with reflections on discipline, practice and vulnerability.

“We’ve connected a little bit over socials and he’s helped me a lot actually,” Smith told English media as he prepared to fly to Australia last week.

“He’s taught me a few things —just different ways to see the game; like the types of things he looks for when he’s analysing opposition and the way he thinks when he makes a mistake.

“It’s his mindset, really. I don’t think we’ll be talking too much on the tour, but hopefully post-game we can have a beer and hopefully I’ll be the one smiling.

“Fingers crossed, I can get a chance to go up against him because he’s a top player and it will be nice to challenge myself against another top 10 in the world.”

Smith made his professional debut with Harlequins in the English Premiership in 2017 and featured heavily in the England under 20s before playing his first Test last year. He played 80 minutes in England’s 32-15 Test win over the Wallabies last year.

The 23-year-old is expected to wear the No.10 jersey in Perth on Saturday, with Owen Farrell at inside-centre, as England coach Eddie Jones looks to firm up his playmaking combination in the lead-up to next year’s World Cup.

Smith, raised in the Philippines and Singapore by his English father and Filipina mother, revealed his extensive learnings in the England-Australia sporting rivalry came courtesy of his step-grandfather, also an Englishman.

“The England and Australia rivalry is obviously huge, not just in rugby, but in cricket and all other sports,” he said.

“My dad instilled in me as a young kid that there is a lot of rivalry and confrontation in those games. I’m desperate to play a part in this series because it’s going to be a special one.

“He watched all five Test matches in a pub called Heckle and Jeckle in Manila. It was 2005, the one when Michael Kasprowicz got caught at Edgbaston. It was a brilliant game.

“I don’t know what my dad was doing, but he was missing work to watch it too with the time zone. It’s been instilled in me and my two younger brothers for a long time. Mum has had to buy in as well. It’s one of those rivalries you want to be a part of.”

Watch every match of the July Test Series on the Home of Rugby, Stan Sport. Kicks off Saturday 2 July with Wallabies v England, New Zealand v Ireland, South Africa v Wales and Argentina v Scotland. All streaming ad-free, live and on demand only on Stan Sport.