Wayne Bennett has accused the Panthers of practising illegal blocks to protect Nathan Cleary at training and called for the NRL to be held accountable for leaks in an explosive press conference ahead of the Rabbitohs’ Saturday night’s final.

The comments came after the Herald revealed Rabbitohs officials made a series of complaints to the NRL over block plays used by the Panthers after their victory against Souths in round 23.

The Rabbitohs argued the Panthers regularly used moving blockers to restrict the ability of South Sydney markers from putting pressure on Cleary’s kick. Blockers are allowed to be used to protect a kicker, but must be stationary.

As a result, Panthers coach Ivan Cleary sent an SOS to the NRL’s match officials this week fearing South Sydney could execute some retaliation to the move during Saturday night’s game, and potentially put Penrith’s star halfback in harm’s way.

Cleary claims South Sydney have put a number of late or high challenges on his halfback after kicking in response to the move.

On Friday, Bennett said the Rabbitohs will be responding if they are blocked again on Saturday night but added the NRL should be more concerned about the illegal play from the Panthers.

“I know from a very, very reliable source, they practise it at training, so it’s a tactic they use,” Bennett said.

“They will be lying if they tell you they don’t practise it. It just doesn’t happen by coincidence.

“We haven’t been able to get near Nathan and his kicks because we are getting blocked by illegal blockers. At the moment, there is no doubt what they do is illegal.

“They’ve got to be stationary. The game has to address it at some stage, it’s illegal. They’re moving sideways and backwards.” 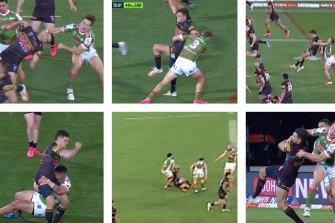 Wayne Bennett has taken aim at the Panthers for practising ‘illegal’ tactics to protect kicks from Nathan Cleary.

When questioned about what sort of response the Rabbitohs will have if the illegal play occurs again on Saturday night, Bennett said: “You better turn the TV on and find out.”

Bennett said the issue was not just one for South Sydney but the game and stop short of calling the Panthers cheaters.

“I’m just telling you they practise it at training. They might not see it as cheating. You will have to ask them that question,” he said.

The complaint was made to the NRL after the Rabbitohs identified Isaah Yeo was guilt of an illegal block that went unnoticed by the referees when the two teams squared off at Suncorp Stadium three weeks ago.

The game saw Cleary had ample time to put up his trademark floating bombs which led to several mistakes from Josh Mansour and Latrell Mitchell.

The South Sydney coach took aim at the NRL, saying he had “no doubt at all” the governing body had leaked out the fact the Rabbitohs had made a formal complaint about the Panthers play.

“That’s what disturbs me most about all this stuff is that we have no confidentiality in our game whatsoever. I think it’s pretty poor.“

‘It won’t define my life, but I want to win a title’: Cleary