The chairmen of Sydney's two AFL clubs have called on the league to make radical changes to the grand final which would see the decider turned into a best of three series and taken beyond the code's heartland.

As Victoria reels from losing hosting rights to the grand final for the first time in the competition's history, Swans chairman Andrew Pridham declared the days of the game being an "MCG exclusive item are gone". 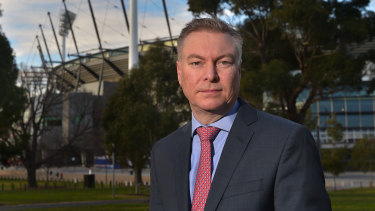 Sydney Swans chairman Andrew Pridham wants the grand final to be played as a best-of-three tie, and not exclusively at the MCG.Credit:Michael Clayton-Jones

"The things that were once impossible are now possible and being organised in a few weeks. You can't tell me things can't happen, they can happen and they should happen, it's time," Pridham told the Sydney Morning Herald and The Age.

"The basic premise should be that it should be shared around Australia for fairness reasons and game development, and there should be a tender where governments bid for the right.

"We've just seen it happen with Queensland, NSW, WA, SA all aggressively bidding in a depression. Imagine what they'd bid when it's normal."

John Longmire, Chris Scott and former Adelaide coach Don Pyke are among those to have opposed a one-off MCG grand final, which they believe is unfair to non-Victorian clubs. 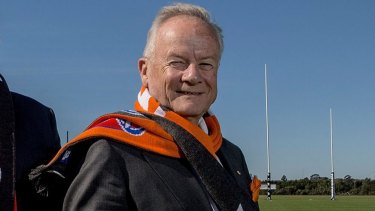 Since the AFL expanded to an 18-team competition in 2012, Sydney and West Coast are the only two non-Victorian clubs to have beaten a Victorian-based side in the grand final from eight attempts.

If hosting rights for the grand final were based on the same rules as the rest of the finals series, five of the past six deciders would have been played outside of Victoria, including 2014 and 2016 when the Swans lost to Hawthorn and the Western Bulldogs respectively.

"They keep banging on about fairness, this is what everyone's playing for – to win a premiership," Pridham said.

"The number one item of unfairness and inequity is playing the grand final most years on the home ground of one of the teams that may or may not have earned it.

"We know better than anyone how hard it is.

"The concept should be it's much fairer to play best of three. It's massively more revenue, not just the states would pay to get the game and the money they then put into those states' football programs and facilities, but also the ticket sales, the revenue. It's a win, win, win, win, win.

"The days of arguing it should forever be an MCG exclusive item are gone."

Shepherd, also the chair of the new Venues NSW entity, said it was a "good idea".

"Why wouldn't you have a look at that as an opportunity for your future to grow your base and crowds?" Shepherd said. "Having a grand final in NSW, Queensland is great for that. It will help establish the code north of the Murray."