Home » Rugby » ‘I’ve still got plenty of footy in me’: Cook at peace with reduced Origin role

The NSW hierarchy predict the days of Damien Cook – or any other hooker – playing 80 minutes in the Origin arena have come to an end as South Sydney move to keep the benched No.9 off the open market.

Cook will come off the bench for the first time in 13-game Origin career, and the first time since 2017 at any level, as the Blues opt for Api Koroisau to start in game two on Sunday night.

For his part, Cook insists “ego does not come into at all”, but acknowledged his pride in regularly playing 80 minutes as he did in Origin I, making 54 tackles without a miss and running for 89 metres.

“The modern game, it’s just getting so quick,” Buderus told the Herald. 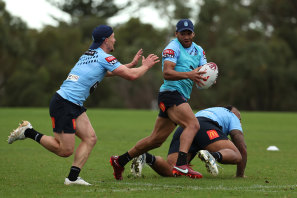 Damien Cook and Apisai Koroisau in concert during Origin training.Credit:Getty

“I think for hookers to be at their best, parts of their game might have to be shared or given around to the team a bit more. There’s just so much going on in 80 minutes of Origin for a hooker.

“Two hookers could well be the new normal, to make sure you’re always on top of that ruck speed and able to take advantage of anything you see.

“Api and Cookie have got such different attributes and you see it with Queensland too; Ben Hunt and Harry Grant worked really well (in game one) and they ran off the back of them.”

Buderus ruled out Koroisau shifting to a role in the middle third when Cook enters the fray, with limited interchanges potentially capping Koroisau’s night as early as the 30-minute mark.

“It is different for me, you do prep yourself differently,” Cook said.

“You’ve got to be ready to go at any time when you’re on the bench and then get yourself up to game speed immediately so when you’re out there you’re not overplaying your hand or caught out.

“It’s an opportunity. There’s a chance to exploit some tired defenders and bring my strengths out a bit more, keep moving that ruck forward and go from there.”

News of Cook’s shift to the bench came on Monday as his management was meeting with Rabbitohs CEO Blake Solly, kicking off extension talks beyond his current deal.

Cook is contracted to Souths until the end of 2023 and the club has no intention of letting him go to market on November 1, making it clear the 30-year-old remains in their long-term roster planning. 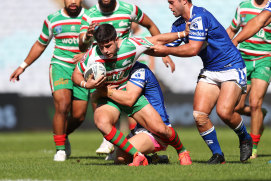 Peter Mamouzelos – in action for the Rabbitohs NSW Cup side – is highly rated at the club.Credit:NRL Photos

The Rabbitohs are due to begin similar talks with fellow stars Latrell Mitchell and Cody Walker in coming weeks, a potentially delicate dance given the trajectories of rising youngsters Peter Mamouzelos and Lachlan Ilias.

Mamouzelos is rated as Cook’s long-term successor at Redfern and the veteran No.9 can see a similar split of game time coming as the 20-year-old rises through the ranks.

“There’s no doubt in the future, to put the club in a good position, to bring the next generation through, we could help that transition that way,” Cook said.

“I’d like to think I’ve still got plenty of footy in me, I hope so. No doubt though, part of being a senior player is sharing that load and transitioning to help the club.

“I enjoy training alongside Pete and he’s improving every day, he’s a great young player. We’ve shared game time a couple of weeks ago when I was backing up from Origin and if there’s a time when we’re both in the team at the same time, it could well be the plan in the future.”