Eddie Jones will split with the RFU on Monday, his seven-year reign as England coach over just nine months before the World Cup in France.

He will go down in history as the most successful England coach in regards to wins and losses, with a 73 per cent win rate, a World Cup runner’s up medal, two Six Nations titles and one grand slam.

Steve Borthwick, Jones’ former right-hand man and premiership-winning coach of Leicester is widely expected to replace him, though it is not clear on what terms.

The Englishman was the frontrunner to succeed Jones after the World Cup and interviewed for the role last month, so the RFU might have signed him on a multi-year deal.

It is a seismic shift in the Test landscape and will have major knock-on effects around the world, especially in New Zealand and Australia.

Scott Robertson, the six-time title-winning Crusaders coach with a stated ambition to coach at Test level, is still on the market. 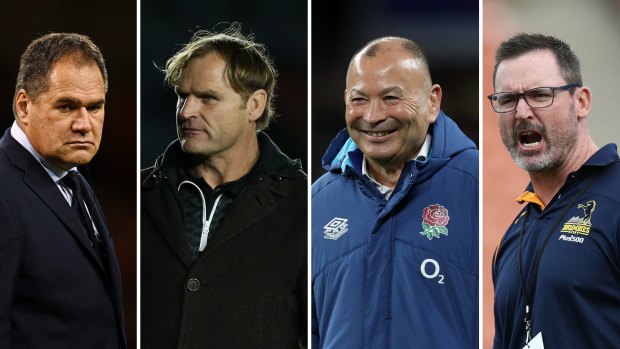 If the All Blacks don’t pick him up as Ian Foster’s replacement, he is the Wallabies’ to land, and a two-decade-old friendship with Rugby Australia powerbroker Daniel Herbert could help seal the deal.

It is a little-known fact that Herbert and Robertson are good friends. They met at French club Perpignan in 2003. They had played each other a number of times in Super Rugby – Herbert for Queensland and Robertson for Canterbury – but it was in southern France that a friendship flourished. It remains strong to this day.

This is not to suggest any bias on Herbert’s part. The RA director, who sits on the powerful rugby committee, has worked with many former teammates and friends over a long involvement in Australian rugby. Alongside fellow committee members Phil Waugh, Ben Whitaker, Hamish McLennan and Andy Marinos, he will put Australia’s interests ahead of personal connections.

It also assumes that Dave Rennie will leave his post at the end of the World Cup, a decision that has been neither made nor announced, as far as the Herald is aware. 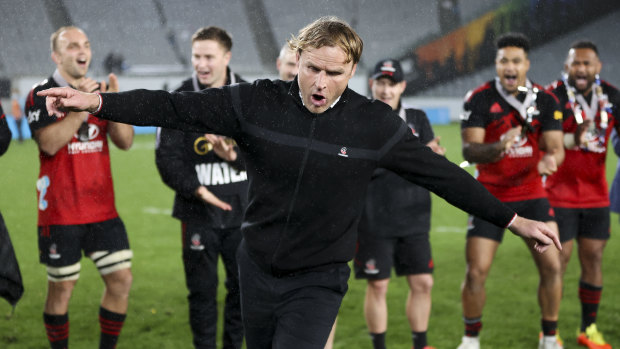 Crusaders coach Scott Robertson has missed out on the England job.Credit:Getty

But since cooling on the idea of renewing Rennie after the first Test win over England in Perth this year, RA sources suggest the committee has worked up a list of potential successors. Which names are on that list has not been revealed, but there are three names that are bound to be at the top: Robertson, Jones and Dan McKellar.

At first glance, the idea of Robertson ending up with a Wallabies pin in his jacket lapel seems a stretch. Many believe New Zealand Rugby would be derelict in its duty to the game if it overlooked the 48-year-old again. His forwards coach at the Crusaders, Jason Ryan, has already been installed in the Test set-up under Foster and all-powerful consultant Joe Schmidt. In August, according to the New Zealand Herald, Robertson was sounded out about the role were NZR to remove Foster. He is the overwhelming fan favourite to take the reins after the World Cup.

There are a few obstacles to clear, however. One of them is Jamie Joseph and the other is ‘Razor’ himself.

Joseph, who won a Super Rugby title with the Highlanders and coached Japan to a historic quarter-final berth at the 2019 World Cup, is the establishment pick to succeed Foster. Assuming every candidate is an outstanding coach, it is Joseph who is an easier fit in the mould of All Blacks coaches. Understated, no-nonsense, tough. He and longtime associate Tony Brown would be a powerful team, provided they can operate with Schmidt in the environment too.

Robertson is the relaxed fit version, fond of surfing, break-dancing and hanging out with his players. He has repeated several times over the past two years that he will not wait forever for the All Blacks to be ready for him and in June spoke fondly of Australia.

The code has challenges here, not least of which is a federated system that has taken excellent coaches and turned them into frustrated diplomats with ever-worsening win rates during the past 20 years.

Nevertheless, a British and Irish Lions tour in 2025 and home World Cup in 2027 would be big draw cards for any coach. RA also punches above its weight in the remuneration stakes.

It would beggar belief if McLennan or Marinos did not try to meet Robertson over a beverage while the three of them were in Europe last month. 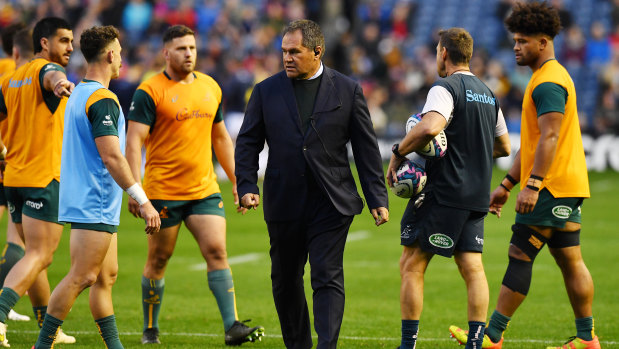 Dave Rennie has coached the Wallabies since 2020 and made it clear he will make a decision about his future early next year.Credit:Getty

Jones finds himself without a job, but won’t be idle for long. He has a record that speaks for itself and must be considered by RA, but is vulnerable to criticism that his unforgiving style does not suit the modern workplace.

McKellar is in an interesting position as the internal candidate. He is viewed as a future Wallabies coach, but right now is also a senior member of staff in a set-up that has yielded poor results.

The RFU’s move on Jones will trigger the dominoes. NZR is considering breaking with longstanding tradition to make a call by May on who will coach the All Blacks in 2024.

This would risk alienating Foster who, if unsuccessful, would take the All Blacks to the World Cup in the knowledge he did not have the long-term backing of the organisation.

But with Robertson now out of the running for the England job, New Zealand will have to ward off foreign suitors Australia and, potentially, Scotland. Gregor Townsend is off contract at the end of 2023 as well.

On this side of the ditch, RA has not said when it will act on Rennie’s replacement, or whether there will be one. But with Jones and Robertson now in play, McLennan and Marinos could take the view that Australia cannot afford to wait if it wants the best coach for the job.