Close to 100,000 junior footballers will return to the field across Victoria this weekend with the easing of COVID restrictions.

However, the limit of one parent or guardian per child and no spectators allowed at games will dent the social aspect of community sport. 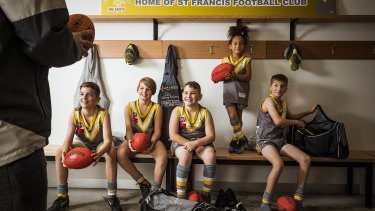 Members of the St Francis Football Club – Ethan (12), Maxwell (11), Samuel (9), Mya (8) and Kyle (12) are looking forward to a return to local footy this weekend.Credit:Chris Hopkins

Dominic Bulzomi has two boys – Julian in the under-14s at Coburg Districts and Samuel in the under-12s at St Francis de Sales – who will play at two different grounds on Sunday, meaning wife Carmel will take one to one game while Dominic looks after the other. The restrictions also mean that the boys’ grandparents won’t be able to attend in support.

“Both my in-laws like to come down and watch the game but they won’t be able to do that this weekend,” Mr Bulzomi said.

“It’s good for them to get out as well and get fresh air, but unfortunately this weekend they’ll have to miss out.

“[But] I think it’s a sensible approach to starting. Whilst it’s not ideal for the parents because as much as it is good for the kids to get back out there, the parents also enjoy it.

“A lot of the parents like to use it as an opportunity to catch up and socialise as well as getting outdoors a bit, but it’s a sensible approach.”

But for Mr Bulzomi, having his kids run around outside is a much better alternative to having them stuck on the PlayStation.

“I think it’s going to be really good for the kids to get back into it finally,” he said. 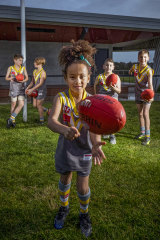 The return of local junior footy this weekend is eagerly anticipated by players and parents alike.Credit:Chris Hopkins

“They missed out a fair bit last year with COVID – we missed a whole season – so getting back in this week is really good.

“At home, they certainly get stuck into their computer games a lot but getting them back on the footy field will be really good for them I think, to socialise and have a kick.”

Canteens will be open for players and parents, most of whom will be busy filling in the volunteer jobs required to run games for junior footy.

“Most of the time the kids are looking for the canteen in the last quarter so they’ll be asking for a hot dog. It’s good some of that facility will be available,” Mr Bulzomi said.

“The only limitation for us I think is, with football, there’s a lot of jobs for the parents to do so you’ll find with only one parent attending with the jobs going around there won’t be a lot of people standing there.”

Restrictions will also be similar for senior football, with no spectators allowed at games and only the minimum number of people required for games to go ahead.

Coaches, team managers and umpires are among those who will be able to take part, but partners of senior footballers will not be allowed to spectate.

Around 1200 clubs and 90 leagues across Victoria will be back competing this weekend, with only a few regional competitions having resumed last weekend.

‘It’s been a big day for me’: Smith wants change after $1.4m concussion payout