The longest-serving club official in the NRL has blasted the August 1 transfer deadline, and said the rule brought in to help short-staffed clubs while in COVID bubbles was “killing tribalism”.

The cut-off for late-season trades ended on Monday with Parramatta missing out on Manly’s Marty Taupau. Wests Tigers centre Oliver Gildart was paraded in Sydney Roosters colours, while Melbourne posted an image of fellow Tiger David Nofoaluma enjoying his first day of training down south.

Canberra chief executive Don Furner has sat back and watched the frantic player movement with a heavy heart, and wants to see the concept torpedoed from 2023.

Rather than allow clubs at the top of the ladder to prey on rivals posted at the bottom, Furner said the best solution would be to force all clubs to look in-house and rely on their junior development to cover for injured first-graders.

The late, late transfer market has divided the game – but Furner could no longer bite his tongue when contacted by the Herald. 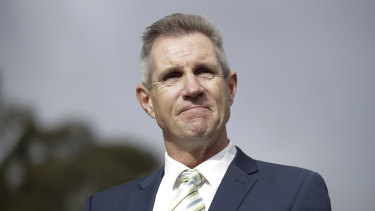 “How can fans remain loyal to your club and the players you sign when they are chopping and changing this late in the season?” Furner asked.

“I do not agree with it. It’s a bad look for our game. There’s too much turnover as it is with players moving between clubs and some even pulling out of deals. Here is another rule that allows it. It was brought in to help us through COVID, but now it should be gone.

“If you talk about genuine rivalries, how can you create that when players are swapping clubs all the time. All the rule does is kill tribalism.

“I get that injuries happen all the time. That’s the like of your season. That’s why you have squads of 30 plus six development players. The idea is to turn those juniors into NRL players, and the only way you do that is by giving them their first-grade debuts, rather than buying in over the top for short-term fix.”

ARLC chairman Peter V’landys on Monday night suggested the NRL would reintroduce the June 30 deadline next year as the August 1 cut-off was only brought in during the pandemic.

“I don’t want to see teams buy a premiership,” V’landys said. “It’s not in the spirit of the game. I will be recommending we go back to June 30 deadline. The only reason it was moved to August 1 was for COVID. I don’t mind if players swap and stay at clubs long term but it’s not a good look for the game when they leave and come back.”

The Storm cast the net wide as they faced a shocking injury toll to their outside backs. After inquiring about New Zealand Warrior Reece Walsh, as well as Tigers duo Daine Laurie and Adam Doueihi, they landed Nofoaluma. The Tigers were happy to loan Nofoaluma because they were happy he would return next season having played finals football and had a first-hand look of how the Storm prepare.

The Eels pushed hard to sign Taupau from Manly, especially with the Kiwi powerhouse unwanted on the northern beaches beyond this season, and with the chance to extend his career at the blue and golds.

The early move would have also saved the Sea Eagles just over $200,000 in their cap for the remaining three months of the season, cash they could have used to front-end a few deals for their star players.

Reports of David Klemmer being on the Eels’ radar emerged as Furner was letting rip. Parramatta forward Bryce Cartwright, 27, welcomed the prospect of Klemmer, a player he enjoyed going up against at junior level when he was with Penrith and Klemmer at the Bulldogs, landing at the Eels.

“The more forwards we get the better, he’s still young he’s only a year older than me, and I remember versing him plenty in the juniors, and I think he’d be a welcome addition for any team,” Cartwright said.

The Roosters, like Melbourne, were desperate for an outside back, and spent more than a week trying to source a replacement, including knocking on the door of Penrith for Rob Jennings before settling on English international Gildart.