The Wallabies will be without Marika Koroibete for the build-up to Tuesday’s second Test against France after the winger missed the birth of his third son to star in Australia’s two-point victory at Suncorp Stadium on Wednesday.

Koroibete was one of Australia’s more dangerous players in the gripping 23-21 win. He beat four defenders while making 17 carries for 68 metres. 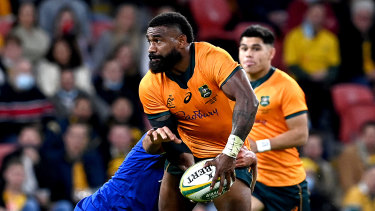 Marika Koroibete impressed again for the Wallabies on Wednesday night against France.Credit:Getty

The Wallabies are fortunate in that the second Test is being played in Melbourne at AAMI Park and Koroibete is likely to rejoin training before the match, provided Rugby Australia receives approval from the Victorian government.

Koroibete may be required to isolate for the next few days at home while he spends time with his family in order to link up with the Wallabies again.

The team is seeking permission to travel to Melbourne on Sunday, two days out from the second fixture of the three-game series, meaning Koroibete won’t be able to train properly with the main group until Sunday at the earliest.

Dave Rennie might be tempted to manage Koroibete’s workload and bring him off the bench instead.

Wallabies believe there is room for major improvement

There were no major injury concerns to report out of Wallabies camp following the physical affair against France.

The overwhelming feeling is the team has much more to offer and that the first hit-out of the year was always going to be punctuated by errors and a lack of cohesion.

Australia trailed 15-0 but rebounded to seal a memorable win thanks to a late Michael Hooper try and Noah Lolesio penalty goal after the siren. It ensured Australia’s 31-year winning record on home soil against France remained intact. 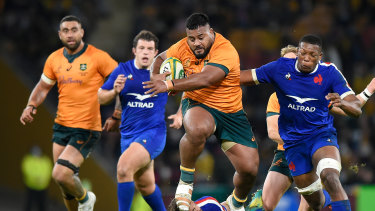 “I was just really proud of the character the boys showed,” Wallabies prop James Slipper said. “It’s fair to say that we were pretty clunky throughout the whole night with the way we played. We probably weren’t playing our best rugby but we found a way.

“At the end of the day we got the win and that’s what we went out there to do. It was pretty hard on the heartstrings there. It was a bit of a pressure cooker at the end.

“Winning is that habit you want to build on. It creates a bit of momentum. For us as a group it was really great to get the result after a good hard three weeks of training.”

Debutant Andrew Kellaway, who had a stint at the Waratahs between 2016 and 2018, said he wondered if he would make in onto the field at Suncorp Stadium. He did, in the 68th minute, and was able to celebrate a maiden Wallabies win with a rendition of Advance Australia Fair afterwards in the sheds.

“That’s the frightening aspect of being on the bench on debut,” Kellaway said. “It wasn’t that long ago I was watching Jono Lance do the same thing and not get on the poor fella. That was definitely on my mind.

“At the same time you’re so caught up in the moment watching the game and particularly the game last night was on a knife’s edge. I’m incredibly grateful and super pumped I was able to get on and have a crack.

“So often you lose games like that so it was nice to be able to win.”

Sports news, results and expert commentary. Sign up to our Sport newsletter.

Juggling and a ‘classified’ journal: Inside what makes Nathan Cleary so good