Australian football hall of fame legend Leigh Matthews will present Victorian players with their jumpers at a team dinner on Thursday night ahead of Friday night’s state of origin bushfire relief match.

And fellow hall of famer Ross Glendinning has been invited to do the same for the All-Stars when the composite side convenes 24 hours out from the historic clash at Marvel Stadium.

Matthews, 67, widely regarded as one of the greatest players of all time, was not only a champion across his 332-game career for Hawthorn but also represented Victoria 14 times, captaining his state in 1980. Matthews also coached the ‘Big V’ to origin wins against South Australia in 1997 and The Allies in 1998 before making his successful return to club coaching with the Brisbane Lions ahead of the 1999 season. 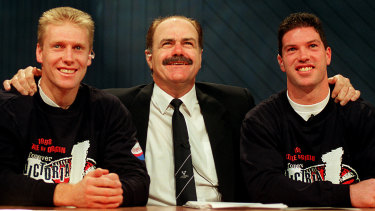 West Australian great Glendinning, 63, was himself a decorated representative player for the Sandgropers, while also coaching WA in 1996 and 1997 to losses against The Allies and The Croweaters. In addition to his 14 matches for WA, Glendinning also represented Victoria twice during an era in which state football was not based on state of origin.

The AFL confirmed to The Age on Tuesday that both greats would be involved in the formalities ahead of Friday's match, the first game of its kind in more than a decade. The two squads will train on Thursday at Marvel ahead of the following night's match.

Squads for the match were announced last week, with final teams set to be named on Wednesday.

The league announced via their website on Tuesday morning that guernsey numbers for Friday night’s charity match would be decided by who had played the most games in that particular jumper number. 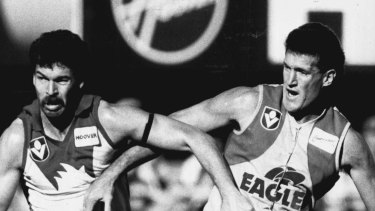 That means that Richmond superstar Dustin Martin will don the No. 4 for the Big V by dint of his 203 appearances in that number for the Tigers, edging Victorian teammates Marcus Bontempelli, Toby Greene, Shaun Higgins and Jade Gresham.

Saint Gresham will wear the No. 1 for Victoria, a move which was questioned on SEN by former Victorian captain Garry Lyon.

“I just think if that’s the tradition. From memory, it has been when I’ve been involved with this team, that that is the Victorian captain," Lyon said.

“Whether it’s Ted Whitten, Leigh Matthews, Paul Roos, Gerard Healy, whoever. Number one, lead them out.

“It has been [the case]. Maybe they’ve foregone that tradition now and they are letting them wear whatever.

“But I would loved to have seen whoever is captain of Victoria, if it’s Scott Pendlebury, out he goes in number one.”

Carlton star Patrick Cripps will wear the No. 9 for the All-Stars, with the West Australian having played more games in that jumper number than Brisbane Lions South Australian gun Lachie Neale.