Home » Rugby » Lolesio snubbed as Donaldson gets nod at No.10 for Wales Test

Cardiff: Wallabies coach Dave Rennie has again sprung a major selection surprise by handing Waratahs playmaker Ben Donaldson an opportunity to impress at No.10 this weekend against Wales ahead of out-of-favour five-eighth Noah Lolesio.

For the first time in the professional era, the Wallabies have picked five different players to wear the No.10 jersey in the same calendar year.

In14 Tests in 2022, Dave Rennie has used Lolesio, Quade Cooper, James O’Connor, Bernard Foley and now Donaldson, who debuted off the bench against Italy two weeks ago.

With Foley unavailable for selection due to club commitments in Japan, it was anticipated that Lolesio, who started all three Tests against England in July, would get another go for the last match of Australia’s spring tour in Cardiff after a starting appearance against Italy.

Instead, Donaldson will take the reins as Australia’s chief playmaker, with Reece Hodge slotting in at No.12 in the absence of the injured Hunter Paisami.

Donaldson was thrilled to make his international debut in the closing stages against Italy but suffered the cruelest of blows when his match-winning conversion attempt after the siren sailed right. 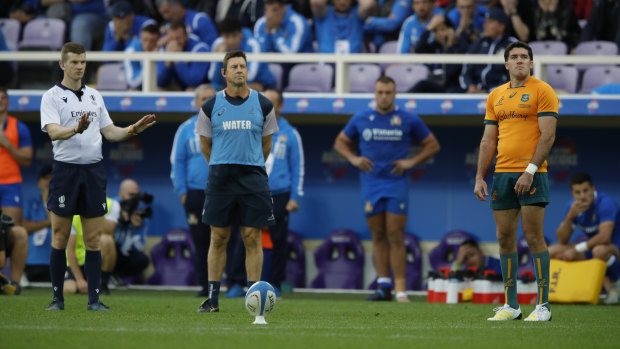 Ben Donaldson lines up his late conversion attempt against Italy.Credit:Getty

The 23-year-old vowed he would move on quickly from the missed opportunity and has the chance to do just that in front of a packed house at Principality Stadium.

“I wouldn’t say it’s always been a plan [to start] Donaldson but we want to learn a bit more about him,” Rennie said. “He’s got a good skill-set. He’s a big kicker of the ball, quick, has an ability to play flat and he’s developing a voice and the ability to boss people around. We need to see plenty of that.

“He’s got points of difference and we want to see what that’s like under the blowtorch. His versatility helps too. He can play [number] 15.

“[Noah] wants to start. There’s no doubt about that. We talk about earning the right to start and earning the right to play and he’s played a lot of good footy for us in some big games. You gotta back that up consistently. There are areas where Noah is trying to develop; his game awareness and his ability to run a game. It wasn’t easy for him against Italy where we didn’t go that well in front of him. We could easily have started Noah. We wanted to find out a bit more about Donno.”

Donaldson, a Randwick junior, will have NSW teammate Jake Gordon alongside him at halfback this week, with fellow Waratahs youngster Mark Nawaqanitawase named for his third straight Test on the wing following an eye-catching performance in Australia’s 13-10 loss to Ireland.

Donaldson has the chance to rebuild his confidence by steering the Wallabies to victory in Cardiff and snapping Australia’s three-game losing streak to Wales.

Rennie’s decision to bench Lolesio, however, will pose more questions about his future. It’s hardly a show of faith in a player Wallabies coaches initially considered leaving out of the touring squad.

Tom Wright has been named at fullback and Jordan Petaia on the wing as part of eight changes Rennie has been forced to make to his starting XV. Jock Campbell could consider himself a little unlucky. 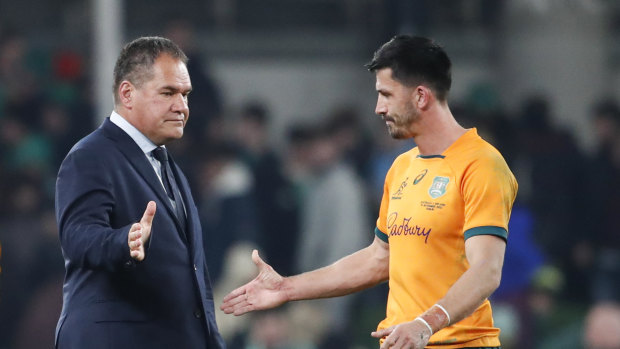 Dave Rennie and Jake Gordon after the Wallabies’ loss to Ireland.Credit:AP

“I think Tom Wright’s voice is massive and his work-rate off the ball [is great],” Rennie said. “Jordy was excellent when he came on – the best we’ve seen him play this year – so he’s probably more suited to the wing for us. He can move back there.”

Former Wallabies captain and halfback George Gregan was spotted at training on Wednesday giving the team a few tips.

The sad reality is that one injury to a halfback – or hooker – before Saturday’s match would require the team to send out an SOS.

Former Wallabies star Drew Mitchell, who played his last Test in 2016, sent out a light-hearted tweet this week.

“Not sure if this is relevant information but I will be in Cardiff this weekend. Just saying,” Mitchell wrote.

Asked what would happen if a back went down, Rennie said: “I hear Drew Mitchell is available. It’s probably a 6-2 [forward and backs] split. The injuries are a massive negative.”

Prop Matt Gibbon and second-rower Darcy Swain are the only two players in the squad who won’t be used, while tight-head prop Sam Talakai is in line to make his Wallabies debut off the bench.

Rennie wants one last big push from the battered and bruised Wallabies against a Welsh side who fell to Georgia last week.

“They’ll be hurting. We’re hurting as well,” Rennie said. “We put a lot into last week’s effort and came up short. They’re probably getting it in the media here and they’ll want a response. We fully understand the intensity required.

Nemani Nadolo on nearly quitting rugby at 23, coronavirus and Leicester

NRL draw revealed: Who your team will play in round one of the 2023 season