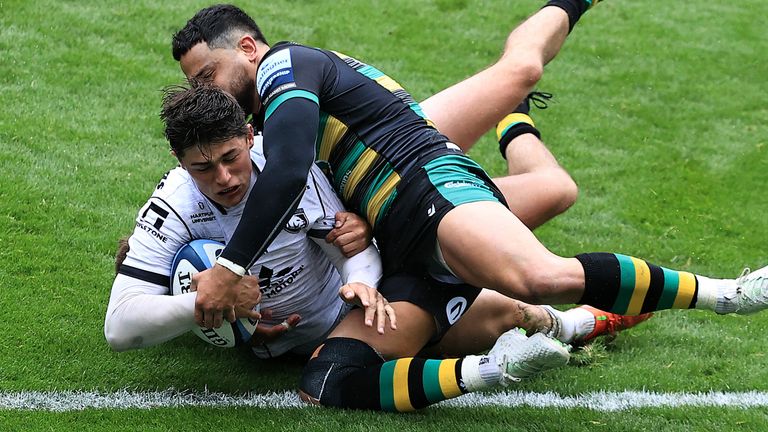 The 20-year-old Wales wing, the youngest player in the 37-strong squad for the three-Test series in South Africa, was playing in front of the Lions head coach Warren Gatland but said that all he was thinking about was helping Gloucester clinch a spot in next season’s Heineken Champions Cup.

“It has been an outstanding week for me,” said Rees-Zammit, who doubled his Premiership try tally for the season.

“Being picked by the Lions did not really sink in until that night when I had dinner with my brother and my parents on their 26th wedding anniversary.

“I had messages from everyone I know, and more, and I cannot thank enough everyone who has helped me, but my focus is playing my part for Gloucester in the final four matches of the season and getting into the top eight. I am not someone who gets ahead of himself and the players here keep me humble.”

Gloucester had won only one Premiership match away from Kingsholm all season, and that by a point at Wasps, but from the moment Rees-Zammit scored his first try after 14 minutes they were in control against a Northampton side which failed to fire a shot.

“We have been looking for a performance to be proud of and this was it,” said Rees-Zammit.

“It has not always gone for us this season but we are a tight-knit group. I may have scored two tries, but others created the chances for me and then it was up to me to do my bit.”

Rees-Zammit watched his Wales and Lions colleague Dan Biggar leave the field after 19 minutes with concussion following a collision with Billy Twelvetrees and said concerns about being injured before the South Africa tour would not cloud his mind in the next month.

“I will be thinking about the games ahead not injuries,” he said.

“Dan is one of my close friends and I spoke to him as he came off the field. He said he was fine and I hope he is back on the field soon.”

Northampton’s director of rugby Chris Boyd was left shaking his head at a performance he did not see coming after three successive league victories.

“We did not win any aspect of the game and the scoreline reflected that,” he said.

“We were embarrassed and it was unacceptable. What it means is that we have lost control of our destiny and to get into the top four we need others to lose.”