Home » Rugby » Lynch, Astbury back for Tigers’ clash with Suns

Richmond’s push to secure a finals spot has received a much-needed boost with the inclusion of key position premiership book ends Tom Lynch and David Astbury for Thursday night’s clash against the Gold Coast Suns.

However, the Tigers have been hit by another previously unknown injury blow, with Kane Lambert (hip/calf) out of the side that lost to St Kilda, as well as Dion Prestia (hamstring), Nathan Broad (ankle) and Noah Balta (ankle). 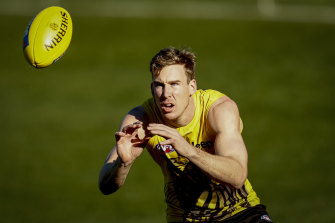 Tom Lynch trains with the Tigers this week ahead of his return. Credit:Getty Images

Rhyan Mansell and Samson Ryan have been omitted, with Jack Ross, Patrick Naish and Riley Collier-Dawkins also coming into the 22 with Lynch and Astbury.

Richmond have lost two games on the trot and sit eighth on the ladder on percentage with eight games to play, and many are questioning whether Damien Hardwick’s side can have an influence on the race for the premiership given recent form and instability in their line-up.

Lynch and Astbury have been sidelined since round 10 with knee and Achilles injuries respectively.

The club is hopeful Balta and Broad can return to play a role in the finals, but this is not guaranteed. 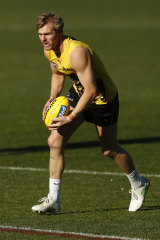 David Astbury is set to make his return against the Suns.Credit:Getty Images

The Tigers will play this week’s game, an away game, at Marvel Stadium. Richmond were set to play Gold Coast at Metricon Stadium in Queensland but the coronavirus situation in the state meant it was moved to Victoria.

The Suns and the Lions flew to Victoria on Tuesday and are facing an extended stint away from home.

Hardwick spoke earlier this week about the challenge that faced his side to re-discover its best form.

“You certainly find out about yourself and your club when you hit some hard times,” he said.

“It’s an opportunity for us to find players that are going to step up and fulfil roles for us … we probably haven’t had the players jump that we’d like so that’s on us as coaches and our playing group as well to make sure we get the very best out of them.”

Richmond have struggled in recent times to score from turnovers, which has been their preferred method of hitting the scoreboard during their three premiership wins and one preliminary final finish from 2017 to 2020.

Hardwick indicated this needed to improve, as well as their pressure, integrating newer players into the side and how they defend.

Will Brodie, Darcy Macpherson, Caleb Graham and Rory Atkins are the Suns’ emergencies, while the Tigers will select their medical substitute from Ryan, Mansell, Thomson Dow and Ben Miller.

From the Archives, 1994: Saints stage great SCG steal from Swans