Home » Magpies turn to young and old on Anzac Day

Collingwood have recalled Will Hoskin-Elliott for their Anzac Day clash as they named an inexperienced team after losing three players to concussion to add to the loss of Jeremy Howe with a hamstring injury and Mark Keane’s suspension.

Jordan De Goey, Levi Greenwood and Chris Mayne were all forced to miss after being diagnosed with concussion and last week’s medical sub Brayden Sier was omitted. 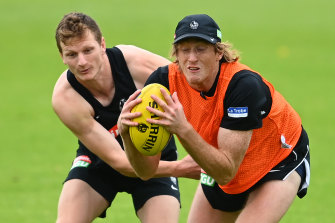 Will Hoskin-Elliott and Nathan Murphy both come in to the Anzac Day line-up for Collingwood.Credit:Getty Images

Wright’s move sees Alec Waterman, who has played three matches for the Bombers, squeezed out of the team while Brandon Zerk-Thatcher replaces Jordan Ridley who misses with concussion. Zach Reid is out due to illness.

St Kilda ruckman Rowan Marshall is a key inclusion for the Saints as they search for an improved performance against Port Adelaide in Adelaide. Zak Jones will add some bite around the ball for the club while Darragh Joyce moves into defence.

The Saints dropped Jack Bytel, Paul Hunter and Luke Dunstan with Jimmy Webster out with a groin injury.

Martin Frederick will play for Port Adelaide with Lachie Jones to miss with an ankle injury. Sam Mayes was dropped.

Hawthorn included Mitch Lewis to play Adelaide in Launceston on Sunday with Daniel Howe out injured and Conor Nash dropped.