Panthers winger Brian To’o says he first planned to propose to his girlfriend during the State of Origin series and hopes teammate Jarome Luai will stand next to him at the wedding after getting engaged at Sunday night’s grand final.

After claiming victory over Souths, To’o capped an unforgettable night by dropping to one knee on the sidelines and proposing to partner Moesha Crichton-Ropati.

To’o said he went ring shopping with teammate Stephen Crichton – who is a cousin of his fiancee – and would have popped the question even if Penrith had lost the grand final.

“It was actually Origin I was planning it, but obviously due to COVID-19 that didn’t happen, so I made it the next step to push for the grand final [to propose], and then we got the win,” To’o said.

“It made it so much better. I’m really happy I’ve got a ring and she’s got a ring as well, I’m really glad she said yes. Win or lose, I was still going to propose to her.

“I knew she was going to say yes. I just told her she was the best thing that ever happened to me, went down on one knee and asked her to make me the happiest man, and will you marry me?” 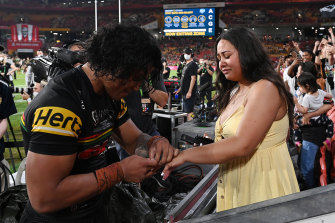 Brian To’o and Moesha Crichton-Ropati moments after getting engaged at Suncorp Stadium in Brisbane.Credit:Getty

“I’ve known her for close to eight years. We’ve been together for about two-and-a-half years now.”

Along with Crichton, To’o and Luai are tight mates and proud representatives of Mount Druitt.

Asked who would be best man, To’o said: “I haven’t figured it out but probably ‘Romes’ [Luai]. I just wanted to get an answer from her first, that was step one. Lucky she said yes.”

Luai, who was in on the plan, said that if was in the bridal party, he would be happy.

“We were rooming today back at our hotel, so he showed me the ring and said, ‘I’m going to do this after the game’,” Luai said.

“It made it more special when we won because I knew he had a spare ring there in his bag, so I’m really happy for ‘Bizza’. He loves his missus. They’re a good couple.”

Crichton said he was excited to become family with his good friend.

“I went to buy the ring with him – me and my missus. He didn’t know when to do it, but he really backed himself [in Queensland]. It certainly was made more special that we won.”