And to think Manly will get Daly Cherry-Evans and Tom and Jake Trbojevic back next weekend.

In their absence on Friday night, Kieran Foran and the ever-impressive Josh Schuster inspired the Sea Eagles to an impressive 32-18 win over St George Illawarra.

Manly’s superstar cavalry would have loved watching every minute at Cbus Stadium.

The Dragons players who were forced to miss the game through suspension because they breached biosecurity protocols by attending Paul Vaughan’s infamous barbecue last weekend would have felt dreadful.

Vaughan has since been sacked while another 11 players – including seven who played against Manly – will need to serve a one-match ban over the next month.

The ramifications of the Vaughan shindig was always going to hurt the Red V in the coming weeks. Zac Lomax and Daniel Alvaro could be missing for weeks.

The sad thing was they were in the position to win this game, but an awful 15 minutes after half-time gifted the game to Manly. 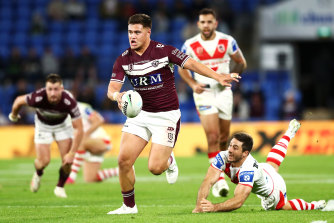 “We fought hard for 80 minutes, even though we didn’t play well. They were just too good and we were poor in a lot of areas.

“I’d say [the suspended players] would be disappointed, like all of us.

“We put ourselves in a position to win the game, but the first ten minutes of the second half was disastrous defensively. We looked like a team coming off the bye and hadn’t played a lot of footy the past month.”

Cherry-Evans was a late scratching after his Origin III performance, Tom Trbojevic was rested from the same game, and Jake was relegated to ballboy duties on the sideline as he nears a return from his glute injury.

But Foran, Schuster and some of the club’s big men, including back-rower Haumole Olakau’atu, did the club proud.

For the Dragons, the sight of Tariq Sims, Andrew McCullough, Corey Norman and Tyrell Sloan holding up little Cade Cust before he was able to slip the arm out and score was the lowest and most embarrassing moment.

Foran scored a try and set up another, while the returning Schuster, who had missed more than a month with a calf injury, did the halfback role justice.

Schuster has an enormous future, and some of his no-look passes and touches were a joy to watch.

There is so much to like about the Sea Eagles, especially once their big names are back on deck. The win without “Turbo″⁣ would have given them a wonderful morale boost.

Foran said the shock loss to Canberra last week was disappointing, and they wanted to quickly bounce back with a dominant performance.

“We were disappointed with the commitment we showed last week against Canberra, so we focused hard on making sure our intent was right for the full 80 minutes,” Foran said.

“[Schuster] is an exceptional player and his skill set is phenomenal. He has so much upside. He’s a danger every time he gets the ball in his hands, and the more time we give him the ball the more opportunities he’ll create.”

Olakau’atu is a big man and a powerhouse on the right edge. He scored his fifth try in as many games and set up Morgan Harper for Manly’s first try of the night.

Griffin will need to rest a few more players next week as part of the Vaughan punishment. They host the Gold Coast, on the Gold Coast. Manly will put a cricket score on the Wests Tigers.