Josh Mansour has signed a two-year deal with the Rabbitohs after being told his services were no longer required at Penrith.

After claiming the minor premiership with the Panthers last year, the Origin star was told by head coach Ivan Cleary he had no future at the foot of the mountains as the club was eager to use youngster Charlie Staines on the wing for 2021. 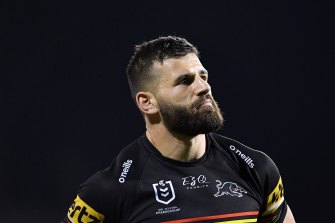 Josh Mansour has signed a two-year deal with the Rabbitohs.Credit:NRL Photos

“More importantly, he is a quality team and club man that inspires his teammates and brings energy to any team of which he is a part.

“He knows what our club is about and respects the tradition and history of South Sydney, as well as the community that the club represents."

Mansour posted a heart-felt farewell to Panthers fans and staff on Instagram, thanking the club for its support despite the split.

"Thank you to my teammates, coaching staff, the fans and the club for an amazing nine seasons together. It has been one hell of a ride," he wrote.

"I have so many fond memories that I'll take with me wherever I go. I'll forever be grateful for my time as a Panther."