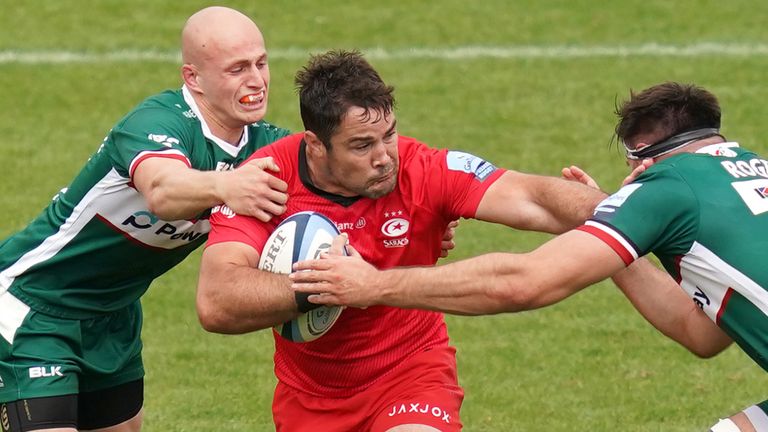 Saracens stepped up preparations for their European quarter-final against Leinster by crushing London Irish 40-12 at Twickenham Stoop in the latest Gallagher Premiership mismatch.

The line-out drive emerged as their most potent weapon with four tries plundered from the set-piece and, having exposed the Exiles’ Achilles heal, they exploited it ruthlessly with two-try hooker Jamie George and England team-mate Maro Itoje at the heart of their dominance.

Prop Richard Barrington also crossed twice, while there were additional touchdowns for Brad Barritt and Billy Vunipola with the bonus point secured in the 35th minute of another lop-sided Premiership contest. Knowing they must spend next season in the second tier of English rugby, Saracens’ sole aim for the 2019-20 campaign is to retain the Champions Cup in a quest that resumes with a seismic quarter-final against Leinster on September 19.

Three Premiership matches remain until their trip to Dublin, offering opportunities to continue fine-tuning, but on the evidence of their trip to south west London their line-out driving maul needs little work.

They powered ahead from such a move in the 10th minute when George pick out Michael Rhodes before joining the back of the maul and touching down when the pack had rumbled over.

And while the personnel were slightly different, it was the same method that led to the second as Itoje caught a pinpoint throw before the surge came and only ended when Barritt, who had joined from the midfield, slipped across the whitewash.

Irish responded when sustained pressure was followed by a half-break by James Stokes and the ensuing pick and goes ended when Argentina great Agustin Creevy, who was making his debut, produced the decisive carry. But the home try was only a brief interruption to Saracens’ dominance as runs by wing Alex Lewington and openside Jackson Wray swept them downfield where a quickly-taken penalty by Vunipola ended with him crashing over.

Centre Matt Williams hustled his way to Irish’s second after the fallen champions blundered at the restart, allowing the ball to be fly-hacked onwards, but they atoned with their next drive downfield when a familiar line-out maul produced a second for George.

NRL 2020: Cameron McInnes gives Paul McGregor the jersey off his back in perfect Dragons farewell

Australia has become a ‘nation of dobbers’

“Nothing to lose” for Rebels, except a final