Bevan French marked his return to action with two tries as Wigan beat Castleford 22-12 in a thrilling and tough encounter.

Castleford were unlucky to be behind at the break having conceded a try to French with three minutes left in the first half.

Wigan were far from impressive in that opening period but they outscored the Tigers by two tries to one before the interval.

The Tigers were first to score after the break, with Derrell Olpherts going over for his second of the match.

Wigan soon hit the front, however, as Jackson Hastings showed his class to send a kick over for French to grab his second try.

Both teams had chances to win the game, but defences were on top and it took a late score from Sam Powell to put clear daylight between the sides and make it four wins from four at the start of the season for Wigan.

Following a slow start to the game, it was the Tigers who took the lead with Jordan Turner starting to take control in the halves. 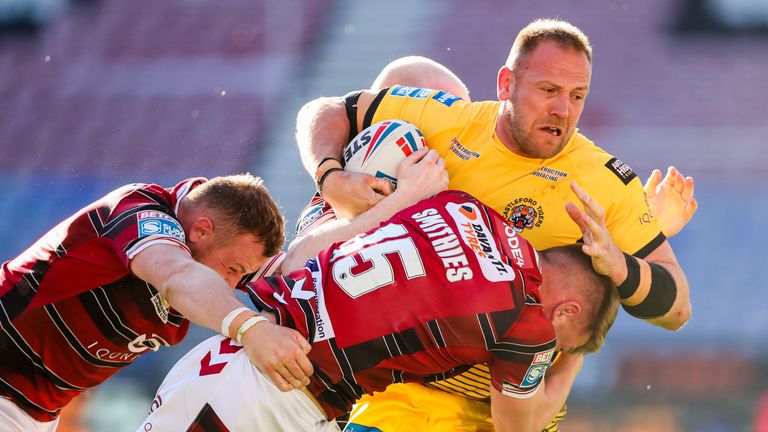 Turner was heavily involved in the opening try as he spread the ball wide and Peter Mata’utia produced a sublime offload under pressure to send winger Olpherts over in the corner. Paul McShane added the extras from the touchline to open up a 6-0 lead.

Castleford looked the better team but struggled to make it count on the scoreboard and the Warriors made them pay.

A break from Hastings put them in a strong attacking position before Harry Smith spotted a gap. Despite being halted by a Niall Evalds ankle tap, Smith sent the ball inside as he was falling for Zak Hardaker to score. The full-back converted to level it up at 6-6.

Castleford regained the lead with nine minutes left in the half when McShane kicked a penalty, and it looked like they would head into the break in front.

However, the Warriors had other ideas.

Wigan were helped into the Tigers half thanks to a penalty and, after spreading the ball from right to left, French swooped over in the corner for his first try of the season. Hardaker converted from the touchline for a 12-8 half-time lead.

There was a moment of controversy in the 47th minute when referee Chris Kendall deemed Olpherts to have been held up over the line following a great tackle from French before changing his mind after a chat with his in-goal touch judge. The try was awarded and the scores were levelled at 12-12.

Wigan did not let that disappointment get them down and they hit back almost immediately to go back in front.

Hastings showed some great vision to spot that Olpherts was out of position and he sent a kick over for French to collect and touch down. Hardaker hit the post with the conversion attempt but Wigan led 16-12.

The result was in the balance until the final five minutes, with both teams creating chances.

But Wigan hooker Powell ensured they remained undefeated as he took advantage of some soft defending to touch down, with Hardaker adding the extras.

Bulldogs enter top eight after downing Eagles in a thriller

Wales make it FOUR wins from FOUR in Six Nations