After a season cruelled by injury in 2019, the father-son selection played every game for the Kangaroos in a dark year for the club, impressing with lockdown jobs on some of the league's elite players while also racking up plenty of the ball when in defence, recording the sixth most defensive 50 rebounds in the AFL and averaging more than 25 disposals from round nine onwards. 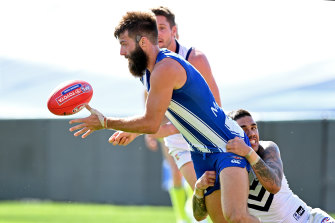 Luke McDonald has been named North Melbourne’s best and fairest for 2020.Credit:Getty Images

Off-season recruit Josh Walker finished seventh, while Shaun Higgins came eighth in what is likely to be his final season at the Kangaroos ahead of an impending move to Geelong.

After finally getting a consistent run of the games at the top level, tall defender Ben McKay placed ninth.

McDonald cleaned up at the awards, also named best clubman and Shinboner of the Year while winning the excellence award, too.