Coach David Teague may have rearranged his magnet board but it did not matter as Carlton’s defensive deficiencies and poor ball use continued to haunt a 2021 campaign that has finals quickly slipping from the agenda.

Stung after a week of criticism in the wake of a heavy loss to Port Adelaide, the Blues’ sometimes dire kicking efficiency and inability to hold up defensively for long periods proved pivotal in an 18-point loss to the Brisbane Lions under the closed Marvel Stadium roof.

The defeat leaves the Blues with a 2-4 win-loss record ahead of season-defining matches against Essendon, the Western Bulldogs and Demons. 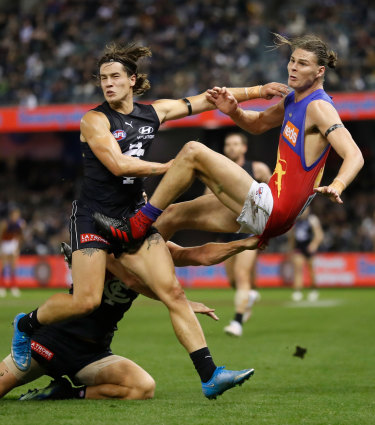 Teague shook up the side with positional changes, returning Marc Murphy to a wing and then on to the ball after he had not had the impacted he wanted in a new role as a small forward. Sam Petrevski-Seton began on the bench and then went to half-forward, having struggled to deliver the required drive from half-back this season. And tagger Ed Curnow was allowed to roam free without having to head to Brownlow Medallist Lachie Neale.

Murphy responded with 19 disposals and Petrevski-Seton, drafted as a midfielder, showed glimpses but there were several excruciating moments. That was exemplified in the second term when high-priced recruit Zac Williams attempted to centre the ball from half-back, only to find Joe Daniher, who passed to Eric Hipwood who converted. An Eddie Betts miss from 20m out late in the third term was another example of a senior player wasting an opportunity.

Harry McKay, however, was a highlight. The key tall is negotiating a new contract but the manner in which he manhandled All-Australian fullback Harris Andrews could mean the Blues will have to stump up more cash. He was instrumental in the Blues’ fightback, booting three of his six goals in the third term and profiting from another strong performance from midfielder Sam Walsh.

The Blues rallied, booting four of the first five goals in the third term, to drag themselves within seven points. Defender Liam Jones was an intercept marking king but the Lions are a class act. Hugh McCluggage was brilliant, an injured Neale brave. Ruckman Oscar McInerney had the better of Marc Pittonet, Charlie Cameron buzzed around, while the Lions’ ability to absorb pressure is the hallmark of any premiership contender.

Lions coach Chris Fagan later expressed concern at the match having gone for an overly long – and taxing – 136 minutes.

The Lions’ bench resembled something of an emergency department. Hipwood had an early knee issue, while Darcy Gardiner was ruled out with concussion, forcing substitute Tom Berry to be activated. Neale had his issues, injuring his ankle in the first term when tackled by Petrevski-Seton, and later having a bloodied eye. That he put his hand on the field umpire after the blood started to spill is likely to be scrutinised by the match review officer. Mitch Robinson was involved in a heavy clash with McKay and needed treatment for a heavy cut. Harris Andrews then had issues in the final term. Yet the Lions found a way to keep the Blues at bay.

A sizzling Patrick Cripps had five touches in the opening six minutes before having a spell on the bench. His clean pick-up in traffic and quick handball to an underperforming Mitch McGovern who converted the Blues’ first was just what he needed after a week where he had been criticised for too often not taking the first option. What was notable was that of Cripps’ 25 touches, only four were by foot, perhaps indicating a lack of confidence in his kicking.

RETURN OF THE YIPS

Daniher knew all about the goal-kicking yips during his time at Essendon and he had an early case of that on Saturday, missing a regulation shot from 35m and then spraying his next attempt out on the full. But when it counted, he sealed the result with a long bomb with three minutes remaining.

John Worsfold had been due to sit in the Blues’ coaches box and start his role as mentor to Teague but, having arrived in Melbourne from Perth on Thursday, was forced to isolate because of the WA lockdown. Worsfold returned a negative coronavirus test and can join the club this week.

AFL season still in doubt ahead of key Monday meetings