Jordan Lewis has criticised his former teammates Christian Petracca and Jayden Hunt after the Melbourne pair were spotted touching each other inappropriately during coach Simon Goodwin's three-quarter-time address on Saturday.

Cameras caught Hunt poking his fingers around Petracca's bottom during the final change of the Dees’ win over Essendon on Saturday. Petracca appeared to reciprocate. 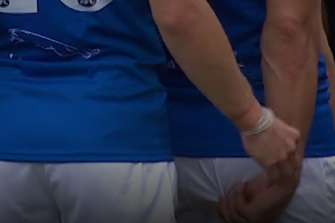 Melbourne have been contacted for comment and are expected to release a statement in relation to the issue. Richmond, St Kilda and Carlton have dealt with similar issues earlier this season. The Tigers and Saints incidents prompted the AFL to issue a statement condemning the behaviour.

Former Demon Lewis told Fox Footy that such behaviour was no longer acceptable.

"Players need to be aware that we live in a different environment now," Lewis said.

"If it's not mentioned on commentary, certainly social media will pick it up, and then when it gains traction the club and the AFL have to address it. They don't need to be attending to these types of matters in such an important part of the year.

"Just don't leave yourself open to this sort of criticism."

Khabib Nurmagomedov and Justin Gaethje make weight ahead of UFC 254

Bondi Stakes: Peltzer is fighting fit for his first test at the mile
Recent Posts
This website uses cookies to improve your user experience and to provide you with advertisements that are relevant to your interests. By continuing to browse the site you are agreeing to our use of cookies.Ok