Richmond president Peggy O'Neal has joined her club's captain Trent Cotchin in calling for the AFL to keep the grand final as a daytime event.

Richmond's 2020 grand final triumph over Geelong on Saturday night at the Gabba was the first time the game had been played at night, and it was the best-watched season decider since 2016. 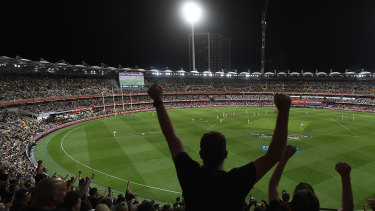 But O'Neal, who has been president for all three of the Tigers' flags in the past four seasons, said the AFL should resist the tempation to change the time of the game.

"No. I didn't enjoy it, the day is very long," O'Neal told 3AW on Monday. "I am a traditionalist, I like the afternoon.

"It is canvassed around and brought up for comment [by the AFL with presidents] but I don’t think there’s an actual vote that happens.

"Night games, generally, like Friday night evening games, children tend not to come in the same sort of numbers and we have to be mindful of the next generation," she said.

"I also think that, having been fortunate enough to win a couple of grand finals … after the game is over it is really time to let players celebrate with their fans and families.

"The next day … there is some family event back at the club and so you think 'well if it's going on until two in the morning and that's just families and they have to turn around and come the next day [that's too late].'

"I think we have to think about what happens after the grand final and make sure that isn’t lost along the way."

AFL legend Leigh Matthews is also in favour of a day grand final, while Cotchin on Sunday said the game should stay in the day.

"It's what I grew up with during the day playing footy and there is nothing better than a red Sherrin at the MCG – or at the Gabba, it's a special place too – on a Saturday afternoon."

But Channel Seven Melbourne managing director Lewis Martin also said on Sunday the game should be played in front of the biggest television audience.

"More people are available to watch at night. My view is that it is really important to showcase the biggest event to where the audience is most available. If you're going to show off, show off where most people can see you."