Discipline can come in many forms: not yapping to the umpire, avoiding trouble in pubs and bars and, in Charlie Curnow’s case, knowing when not to train. The competitor in him decrees he be the first on the track, the last to leave, but for the injury-cursed forward more is less.

That is easier said than done. The idea of someone else, even a teammate, squeezing that extra per cent over him can be hard to accept. So, too, the notion he is better off having an early shower rather than completing another running session.

“When you love the game you want to stay out on the track and do extras,” Ashley Hansen, Curnow’s forwards coach at Carlton, said.

“He had to listen to the advice: ‘Charlie, you’ve hit all your markers, you’ve had a great a session, walk off the track.’

“To a degree he probably achieved more through doing that than potentially putting him at risk by doing a bit more for a small and insignificant gain.” 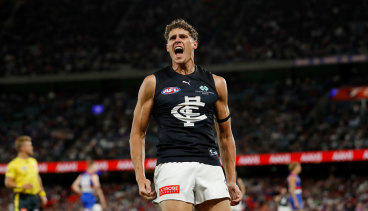 After more than two years out injured, Charlie Curnow is ready to deliver for the Blues.Credit:Getty Images

For the first time since he emerged as the Blues’ great hope during the Brendon Bolton era, Curnow is fit, able and ready to deliver on the potential that prompted Dermott Brereton to predict in 2017 he was just two years from becoming the best player in the competition. Sadly for the Blues, it was not to be, which is not to say it never will be.

Plenty has happened in Curnow’s world in the 1013 days since his match-winning effort last week against the Western Bulldogs and the night he almost single-handedly beat the same team in June 2019.

A week after his pre-pandemic bag of seven, he suffered what was initially diagnosed as knee jarring, which post-match scans confirmed to be a medial ligament strain. The club had believed it to be a three- to four-week injury, but it cost him the rest of the season.

He has since hurt his knee four times, all in seemingly innocuous yet unusual circumstances, playing basketball, slipping on stairs, lifting weights at home and in kick-to-kick with his brother Ed. Before last week, he had undergone more knee operations than he had kicked goals. Holes have been drilled into his knee cap, grafts and wires inserted, bones reinforced.

The remaking of Curnow has been a study in patience and perseverance. Through the two years between his 58th and 59th games, his hunger and determination never wavered, football manager Brad Lloyd said, despite the daily monotony of weights, stretching and Therabands (resistance bands) in rehab.

The remaking of Curnow has been a study in patience and perseverance. Through the two years between his 58th and 59th games, his hunger and determination never wavered.

The plan to rebuild Curnow pretty much from scratch was split into three phases: healing, strengthening, and physical conditioning. Blues high-performance boss Andrew Russell had overseen a similar program at Hawthorn for Shaun Burgoyne, who overcame debilitating knee injuries.

Burgoyne famously fronted up to his first press conference as a Hawk on crutches only to play 250 more games and become the fifth inductee to the 400-club.

The Blues took the view the more time they gave Curnow’s right knee to heal from surgery the better outcome they would get. Then came the time to strengthen the muscles that had weakened as he recuperated. Aware of his extensive history, the club monitored him daily to gauge how he responded each time there was a change or advancement to his program.

Conditioning an athlete for the rigours of AFL football takes considerable time, particularly for a player who had not played for two years – even one as athletically and genetically gifted as Curnow, whose sister, Eliza once came second in the 1500m nationals and brother, Ed, is a time trial king.

As much as the Blues wanted him back on the park, they embarked on a conservative plan setting him up to succeed long-term.

“He was held back by our medical team last year probably a bit more than he needed to be,” Lloyd said.

Curnow desperately wanted play in Ed’s 200th game but had to settle for a return the following week, a move criticised by Ross Lyon, then thought to be the Blues’ preferred choice to succeed David Teague, who believed it came too soon after just five quarters of unofficial reserves matches.

Lyon was not wrong, nor were the Blues. Curnow had minimal influence in his four games, quickly running out of puff, but after so long out, he needed reward for effort.

“For him to get a couple of games in was important for him mentally and physically so that it set up pre-season for him beautifully,” Lloyd said.

By the time pre-season came around, Curnow had laid the foundation to build upon. For the first time in years, he could attack a summer with vigour. Following a modified program which prioritised main training sessions and gym work, Curnow did what was asked – nothing more.

Every time Curnow leaps for a mark Blues fans hold their breath until they see he has landed safely. Hansen did too in November but after months of hard work coordinating landings and competing at training he no longer has his heart in his mouth every time his prized forward flies.

Seeing is believing, and Hansen says the effect of Curnow’s game last week cannot be understated.

“It gives him the belief and maybe removes any trepidation he had going into the season around where he stood in the game,” Hansen said.

“He missed two years, this game evolves so quickly that you don’t deserve anything, He had to put in the work, he had to adapt. His contribution to the team’s outcome is what would have relieved him the most.

“He probably felt like he repaid a bit of faith to the footy club that’s stood by him, and he’s contributed to his teammates which I know is the thing that drives him.”

Hansen is the fortunate forwards coach in navy blue to have Curnow and Harry McKay together in their prime years. Drafted in 2015 by Stephen Silvagni to become the club’s key forward pillars for the next generation, the pair have lined up together in just 27 of a possible 129 games. Former coach Teague had them on his whiteboard in just four of his 50 games at the helm. 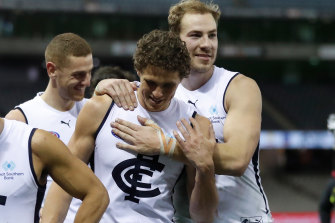 Charlie Curnow and Harry McKay have seldom played together since being drafted in 2015.Credit:AFL Photos

Hansen’s job is to make sure the “front seven machine”, as he calls the forward line, are more than the sum of their parts. In round one, the Blues’ scoring came primarily from their midfielders. Against the Dogs, the forwards supplied 13 of the 16 goals.

The system is working, not just because of the results. Rarely do McKay and Curnow fly for the same ball. The sight of Curnow wheeling onto his right foot and spotting McKay hurtling back to the goal square is another positive indicator.

“The system is designed so they trust one another to be in different areas, so we’re consistently giving the ball-carrier multiple options,” Hansen said. “When you’re doing that you’re keeping the opposition defence really accountable and hopefully giving one-on-one looks and not allowing support players to come.

“They’re sensitive they’re part of a machine as a whole and the more they buy in the greater the opportunity they give to their teammates and in turn themselves.”

After two-and-a-half years of misery, nobody could begrudge Curnow any success. One of few extroverts in the Blues’ side, he has a magnetic pull on teammates and fans through the verve in which he plays.

“He’s just high energy, he’s really excitable, you can sense that when you meet him and talk to him, he has a contagious personality that people gravitate to,” Hansen said. “He loves the game of footy and loves being around people, that’s why he’s in a team sport.

“I know a lot of his teammates are enjoying playing with him at the moment, which is great.”