Transgender footballer Hannah Mouncey is prepared to launch legal action against the AFL challenging the efficacy of the league's gender diversity policy released in October last year as she makes a bid to play state league football in Canberra in 2021.

Mouncey published a letter on social media declaring she had no other option but to take legal action if she wanted to play for Ainslie in the first-grade competition in Canberra. 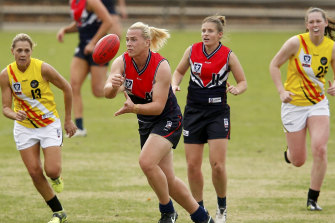 Mouncey said she has no intention in making another bid to play AFLW.

Mouncey told The Age on Saturday that she made her intention public after receiving what she considered an unsatisfactory response from the league on Friday afternoon, with the legal action to be submitted in Canberra if a resolution is not reached.

In her statement late Friday, Mouncey outlined a list of questions she believed the AFL needed to answer satisfactorily before she took part in the application process to be declared eligible to play state league football with Ainslie.

The questions related to the transparency of the process, how the information and data will be used and who might sit on the AFL gender diversity policy committee which is to be used to resolve disputes under the policy.

The AFL released its gender diversity policy in October with applicants needing to fulfil three criteria to be declared eligible to play in elite competitions.

The three requirements are:
1. Testosterone levels to have been at or below five nmol/L for at least two years prior.
2. If that threshold is met, trans women and non-binary people may nominate for the AFLW draft or apply to play in other elite competitions by providing information regarding their height, weight, bench press, 20-metre sprint, vertical jump, GPS data and two-kilometre time trial.
3. If the application is approved, the player is required to maintain their total testosterone levels below five nmol/L, and may be required to undergo periodic testing.

Mouncey said if the matters she raised were addressed she would be prepared to submit an application although she questioned why information such as bench press, 20m sprints and vertical jumps were necessary to inform decisions.

She claimed the AFL's approach has been legalistic rather than open to a resolution.

Six Nations team of the weekend: England and France dominate round 3 with wins over Ireland and Wales