Netstrata Jubilee Stadium: Nathan Cleary praised the arrival of hooker Api Koroisau for helping him start the season with a bang as Penrith came from behind to down St George Illawarra.

On a balmy night at Netstrata Jubilee Stadium, where the mosquitoes outnumbered the support staff and media in the stands, the visitors scored two tries in as many minutes to turn a 10-point deficit into a 32-28 win over St George Illawarra. 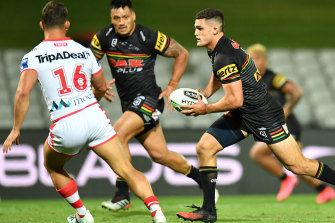 Nathan Cleary on the attack.Credit:AAP

"If you see some of the tackles he makes in the middle, it's unbelievable. Last week he had something like 59 tackles.''

Koroisau and Cleary bagged the first two tries and the Panthers were coasting before Dragons fullback Matt Dufty raced 90m for an intercept try.

The shock long-range effort swung the momentum the way of the Red V, and they arguably should have led by more than four at the break after Brayden Wiliame's pass to an open Jordan Pereira was ruled forward.

Coach Ivan Cleary said Koroisau often created deception around the ruck and gave Cleary a lot more time and space with the ball.

Cleary snr was just as happy with Crichton, who bagged a second try in as many weeks and is giving him plenty of selection headaches.

Crichton is bound to push for a starting fullback berth at some stage this year, but for the time being will need to bide his time behind Caleb Aekins, who could yet make way next week for Dylan Edwards (ankle) ahead of the tough road trip to Melbourne.

As the mountain men celebrate their rare blazing start to the year, the Dragons butchered another chance to win.

Dragons coach Paul McGregor, whose team led by 10 with as many minutes remaining, said his players were working ''bloody hard, they just need to be smarter at the right time.''

"There are positives there but we're losing games,'' McGregor said.

"We've been in the position to win both times. If you score 28 points you should win, and defensively you shouldn't let in 32 points. That's the disappointing thing.''

Things don't get any easier for McGregor and the Red V who hit the road to Canberra next Thursday. Thye at least welcome the return of suspended firebrand Tariq Sims and skipper Cam McInnes (knee).